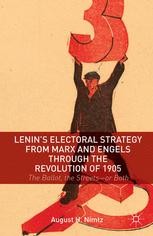 The Ballot, the Streets—or Both

This book explores the time in which Lenin initiated his use of the electorate, beginning with the Marxist roots of his politics, from his leadership of Russian Social Democratic Labor Party in the First and Second State Dumas to Russia's first experiment in representative democracy from 1906 to 1907.

August H. Nimtz is Professor of Political Science and African American and African Studies and Distinguished Teaching Professor at the University of Minnesota, USA. He is the author of Marx and Engels: Their Contribution to the Democratic Breakthrough (2000), Marx, Tocqueville, and Race in America: The 'Absolute Democracy' or 'Defiled Republic' (2003), and a number of related articles in edited volumes and journals.

“Provides an impressively detailed account of the work of the Bolsheviks in the Russian par-liament, the Duma, during the pre-revolutionary period. … Nimtz’s book also shows Lenin’s great commitment to democracy, in the face of the common right wing smears against him as an elitist or a despot. … This is a thorough and readable summary of Lenin’s work on elections and the nature of parliaments.” (Richard Donnelly, International Socialism, Issue 157, 2018)

“As good as Nimtz is in bringing the past to life and uncovering new and important aspects of Lenin’s political practice, his analysis of current left formations falters, as he gives what seem like cursory reviews of complex situations in Greece, Germany, and elsewhere. … Lenin’s Electoral Strategy deserves to be widely read and discussed.” (International Socialist Review, Issue 99, January, 2016)

"August Nimtz presents a challenging and controversial thesis: Vladimir Ilyich Lenin made elections of all things central to his revolutionary strategy in Russia. No less distinctive is his well-documented contention that Lenin's thought was fundamentally democratic, deeply rooted in the theoretical and practical-political contributions of Karl Marx and Frederick Engels. A vibrant contribution to the swirl of scholarly and political debate, Nimtz's impressive work will generate new insights in history and present-day realities." Paul Le Blanc, Professor of History, La Roche College, USA and author of Lenin and the Revolutionary Party