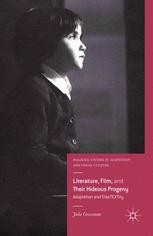 Literature, Film, and Their Hideous Progeny

This book posits adaptations as 'hideous progeny,' Mary Shelley's term for her novel, Frankenstein . Like Shelley's novel and her fictional Creature, adaptations that may first be seen as monstrous in fact compel us to shift our perspective on known literary or film works and the cultures that gave rise to them.

Julie Grossman is Professor of English and Communication and Film Studies at Le Moyne College in Syracuse, New York, where she teaches courses in literature, film, and gender and cultural studies. She has published numerous scholarly articles on film, literature, art, and adaptation. Grossman is co-editor of A Due Voci: The Photography of Rita Hammond (2003), author of Rethinking the Femme Fatale in Film Noir: Ready for her Close-Up (2009, 2012), and her co-authored monograph (with Therese Grisham) on the directing work of Ida Lupino is forthcoming.

“Literature, Film, and Their Hideous Progeny forms one wide-ranging study, in which chapters of each of the three sections are expected to be read linearly. … Grossman has compiled an intriguing and thought-provoking set of essays. … All in all, Literature, Film, and Their Hideous Progeny is an intriguing read for fiction and film scholars, and for anyone passionate about literature and cinema.” (Emma Bálint, Hungarian Journal of English and American Studies, Vol. 23 (2), 2017)

“In her provocative and energetic study, Julie Grossman employs the central metaphor of ‘hideous progeny.’ … In every sense of the word, Grossman’s is a ‘vital’ contribution to the field of adaptation studies. … Like other excellent scholars in the field of adaptation studies, Grossman is creating a monster­–and for those of us who teach and write about the process, this is thrilling stuff indeed.” (Nancy M. West, South Atlantic Review (SAR), Vol. 81 (2), 2016)

"This is a bracing and rigorous book on film adaptation that ultimately goes well beyond its specific subject in its ambitious inquiry into the polyvalent registers of representation. Grossman's daringly multilayered study asks us to consider the very nature of adaptation, its inherently monstrous nature as a hybrid creature but also its potentially joyful quality as an unclassifiable creation. It is as lively and entertaining as it is a brilliantly innovative intervention in a well-established but controversial field. Grossman's work will be required reading in adaptation classes and - the greatest homage - endlessly adapted for their own purposes by scholars in the field." - David Greven, University of South Carolina, USA