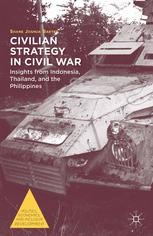 Insights from Indonesia, Thailand, and the Philippines

While typically the victims of war, civilians are not necessarily passive recipients of violence. What options are available to civilians in times of war? This book suggests three broad strategies - flight, support, and voice. It focuses on three conflicts: Aceh, Indonesia; Patani, southern Thailand; and Mindanao, southern Philippines.

“The potted histories of each of the conflicts provide some of the most interesting and readable parts of the book. … this is an interesting book and a useful resource for those wishing to understand why civilians in conflict zones do not always, or often, conform to stereotypical patterns of behaviour. Civilians always exercise some degree of agency, if sometimes within constrained parameters, and their responses reveal much about the nature of the conflicts in which they are engaged.” (Damien Kingsbury, Pacific Affairs, Vol. 89 (2), June, 2016)

"A powerful and much-needed study on the role of civilians caught up in civil wars and conflicts. While most studies build on the false dichotomy of civilian and combatant, Barter's ethnographic work unearths the space in-between. This accessible book shatters facile notions of victimhood and is a necessary resource for anyone who wishes to understand wars, conflicts and paths to their resolutions." - Michael Jerryson, Youngstown State University, USA

"This is an important book. Shane Barter upends conventional approaches to civil war by placing civilians and their strategies at the center of analysis. Instead of viewing ordinary people as mere passive victims of war, Barter shows how they are active agents in creating their own fates, weighing and deciding between often agonizing choices. Written with deep sensitivity, this book challenges how we think about civil war." - Edward Aspinall, Australian National University

"This book offers a fascinating account of choices civilians make in civil war. Through an impressive array of interviews in difficult conditions, Barter unveils a much more complex fresco of the strategies that they adopt not only to survive but to defend their status or courageously defy their oppressors. Through the lens of intensive fieldwork primarily in Aceh, this study is a useful corrective to accounts of civil war that place too much emphasis on armed combatants, which sheds new light on how local people negotiate the surrounding violence and destruction.' - Jacques Bertrand, University of Toronto, Canada