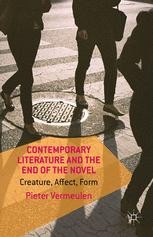 Contemporary Literature and the End of the Novel

This book explores the paradoxical productivity of the idea of the end of the novel in contemporary fiction. It shows how this idea allows some of our most significant twenty-first century writers to re-imagine the ethics and politics of literature and to figure intractable forms of life and affect.

Pieter Vermeulen is Assistant Professor of American literature at the University of Leuven, Belgium. He is the author of Romanticism after the Holocaust and the co-editor of, most recently, Institutions of World Literature.

“Contemporary Literature and the End of the Novel is an admirable piece of work, drawing on a panoply of theoretical sources, densely written and offering any scholar of contemporary fiction a splendid update on the latest developments in the Anglophone novel and its criticism. … this brilliant study invites the reader to cross boundaries of subjectivity, culture, race, systems, paradigms.” (Hedwig Schwall, English Text Construction, Vol. 8 (2), Winter 2015)

"An important, intellectually demanding and wide-ranging book, drawing on the most recent work in the humanities: it should be read by everyone working in the field of contemporary fiction." - Professor Robert Eaglestone, Royal Holloway, University of London, UK

"If declarations of the novel's exhaustion have a long and illustrious pedigree, what function do pronouncements about its death play today? In this wonderful new book, Pieter Vermeulen argues that the contemporary novel is obsessed with its own insufficiency and exhaustion. In a scholarly voice as clear as it is provocative, Vermeulen argues that fiction by the likes of J. M. Coetzee and Teju Cole demonstrate the novel's obsession with its own zombie-like persistence. One measure of the novel's undeath is its endurance as something more like a form than a genre and one symptom of that uncanny survival is the development of a social and ethical register attuned to unrecognized and impersonal affects such as the creaturely, the dissociative, and the failed.

Contemporary Literature and the End of the Novel is much more, though, than an intervention in the evergreen debate about the future of fiction. For Vermeulen, the novel is a form rich in theoretical wisdom, with the capacity to transform novel theory itself. It's this kind critical generosity and flexibility that ultimately makes this book so satisfying to read. Contemporary Literature and the End of the Novel joins literary-historical wit to a rigorous knowledge of interdisciplinary fields such as affect theory, animal studies, and aesthetic philosophy. It's a brilliant book by one of the very best young scholars of contemporary literature. It should be required reading for all serious students of twenty-first century writing." - Matthew Hart, Columbia University, USA