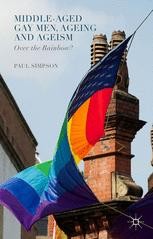 Is midlife for gay men the start of a slide towards the rejection, exclusion and misery associated with the spectre of the lonely old queen? Whilst exclusion is possible as gay men age, Middle Aged Gay Men, Ageing and Ageism offers a more nuanced view of gay ageing, using sociological tools to advance understanding beyond stereotypes.

Paul Simpson is Lecturer in Applied Health and Social Care at Edge Hill University, United Kingdom. He is also Principal Investigator in and founder member of the OPUS Research Group (Older People's Understandings of Sexuality) based at Edge Hill University and the Universities of Manchester, Bradford and Queensland, Australia. Previously, he lectured in Sociology at the University of Manchester, United Kingdom, for three years.

"Paul Simpson's book makes a strong, original contribution to the field of gay life histories and gay men's ageing . . . because it counters a still widely held stereotype that middle age is seen as heralding the beginning of the end of life's promise." - Peter Robinson, Swinburne University of Technology, Australia

"Paul Simpson has produced an accessible, marvellously written book that fills several gaps in existing knowledge, particularly within the general LGB&T ageing literature. He makes a very strong case for looking at mid-life amongst gay men with a well-honed sociological imagination and in new ways, eschewing the notion that everything that can be said about this group of men has been said already. His development of the Bourdieusian inspired concept of ageing capital provides a critically insightful way of making sense of these men's relationships, (dis)connections and behaviours, but in ways that will be applicable to many sociologists and gerontologists interested in the deleterious effects of ageism in all its guises, in many (differing) contexts. This book should be essential reading for those researching sexualities, ageing, masculinities and indeed others who want to read a contemporary classic in the making." - Andrew King, University of Surrey, UK

"Here, at last, is a study that will help us understand how the male gay community is deeply organised through the complexities of age, ageing and ageism. Brimming with stories of middle aged men, Paul Simpson shows us how the differentiations of body and identity, space and relationships get reworked though age. This is a pioneering and important study with implications for a broader more inclusive gay politics." - Ken Plummer, University of Essex, UK

"Simpson's narrative vividly brings to life the voices of older gay men as they reflect on bodies, sex, love, family, friends and home. As theoretically rich as is it is empirically grounded, Over the Rainbow offers a moving, pertinent and often humorous analysis of gay male ageing. This is a wonderfully original contribution to sexuality studies and to sociologies of age, time and generation." - Sally Hines, University of Leeds, UK

"Simpson chronicles stories of middle-aged gay men in Manchester, who find gay ageing unwelcome, weather it, or stake a claim for a more inclusive gay scene, whether in a bar, online, or a sauna. They internalize ageist discourse, which influences how they relate to others and themselves, including 'tolerant' heterosexuals. Many struggle to fit themselves comfortably within youthful gay spaces, while trying to avoid being judged as age-inappropriate. The book shines in its attention to subtleties, astute descriptions, sensitivity to gradations of experience, and consideration of not just the gay scene divided, but also politics in a minor key, a softer, less perceptible intergenerational activism." - Jason Whitesel, Pace University, USA