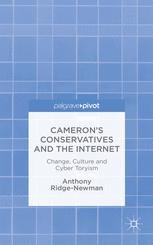 Cameron’s Conservatives and the Internet

The internet is changing the way we interact and communicate. But how is it impacting on more historically traditional institutions like the British Conservative Party? This book examines the role of specific internet technologies like ConservativeHome, Facebook, Twitter and WebCameron in the organizational culture of the Tory Party 2005-14.

Anthony Ridge-Newman has diverse expertise in academia, communications, politics and media. He conducted the ESRC funded research on which this book is based at the University of London, 2008-11. During that time, he was a councillor for Virginia Water and a parliamentary candidate for Ynys Môn |Anglesey. This first-hand experience was embraced in the book using ethnographic methods.

"Benefitting from being written from both an academic and an insider perspective, this book effectively outlines the challenges that new technology and social media pose to the organizational and campaign hierarchy that has traditionally characterized the Conservative Party even if it is individual entrepreneurs and not just the grassroots who have been empowered by what's going on. Ridge-Newman shows, however, that the advent of digital democracy doesn't only pose risks for parties; it also offers rewards especially if they recognise, as he clearly does, that online and offline activism can complement each other in ways that might provide a much-needed fillip to political participation among old and young alike". - Tim Bale, Professor of Politics, Queen Mary University of London, UK

"Anthony Ridge-Newman's well-researched book is prime reading for anyone interested in the changing nature of the Conservative Party since the expansion of the internet in British politics. This comprehensive analysis of the role of new media in Conservative organization is balanced, thought provoking and an extremely compelling read". - Michael Fabricant, Member of Parliament for Lichfield, UK

"Anthony Ridge-Newman provides an innovative analysis of the Conservative Party's engagement with the Internet and social media under David Cameron. Drawing on ethnographic methods of participant observation during a hard-fought election campaign, his book is unique, breaking new ground in the study of the role new technologies are playing in the on- and off-line lives of political activists in contemporary Britain". - Alexander Smith, Assistant Professor of Sociology, University of Warwick, UK

"Anthony Ridge-Newman's book offers the first in-depth investigation of the role of the internet and digital technologies in the Conservative Party under David Cameron, which is enriched by a detailed account of the author's own candidacy at the 2010 General Election. In this book, Ridge-Newman demonstrates not just the enormous transformative power of the internet to communicate political messages, but also explores the challenges that new forms of digital technology pose to traditional structures of power and authority within all political parties. This fascinating book will be essential reading for political researchers and practitioners alike". - Dr Alex Windscheffel, Royal Holloway University of London, UK

'The book is worthy of repeated reads, as Newman manages to not only deliver a wide range of information in a very accessible way, but allow for space for us to consider the deeper questions about the ways social media affects our social and political motivations.' - Jackson Cooper, The Carolinian