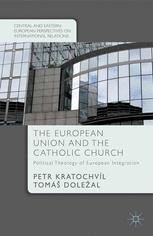 The European Union and the Catholic Church

As the first comprehensive monograph on the relations between the Catholic Church and the European Union, this book contains both a detailed historical overview of the political ties between the two complex institutions and a theoretical analysis of their normative orders and mutual interactions.

“This is a timely book on an important social theme, the relations between the European Union and the Roman Catholic church. … a valuable contribution to interdisciplinary social research which will be of interest to anyone concerned with the evolution of attitudes to the European project, or to the role of religion or the Catholic church, within the EU.” (Douglas Mark Ponton, Journal of Language and Politics, Vol. 15 (5), 2016)

''The role of the Catholic Church in European integration is a controversial and newsworthy topic. This book, the product of a great deal of research, is an excellent addition to the small but now growing literature on this topic.'' - Jeff Haynes, London Metropolitan University

''Now that the academic frenzy surrounding religious radicalism has run its course, scholars can turn to analyzing the far more significant 'normal' politics that constitute the lion's share of religion's role in the contemporary world. Kratochvíl and Dole al take on no less daunting a challenge than the religious politics of the two largest players on the European continent, the Catholic Church and the EU. Their analysis is multifaceted, systematic, and fascinating, uncovering remarkable insights about the spirituality and civil religion of the EU and the political values of the Church.'' - Ron E. Hassner, U.C. Berkeley

''This meticulously researched slim volume covers a great deal of ground and will be of much interest and use to a number of audiences: not just Catholic theologians and political theologians but theorists of IR, political scientists as well as sociologists and anthropologists. It resonates with the shift from the state-centric view to the view of the plural world of civilizations and cultures, differently defined.'' - Vendulka Kubálková, University of Miami