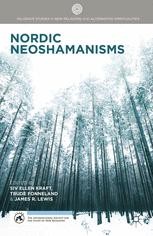 This book proposes that the drive for religiosity and experiences of the sacred are far from lost in contemporary western societies. The contributors' objective is to explore the myriad of ways late modern shamanism is becoming more vital and personally significant to people, communities, and economies in Nordic countries.

“This is an important contribution to a much-neglected area of research and for that reason is recommended for scholars with a specialty in alternative religions or religion in Northern Europe.” (Ethan Doyle White, Reading Religion, readingreligion.org, February, 2018)

“Nordic Neoshamanisms is a welcome addition to the study of new religious movements in general and of modern forms of paganism and shamanism in particular. … This book constitutes an important addition to the libraries of scholars of religious studies and new religious movements, Nordic and Scandinavian studies, as well as general readers interested in new spiritual searches.” (Mariya Lesiv, Nova Religio, Vol. 21 (1), August, 2017)

“This is an important book, offering the first close examination of a diverse range of Nordic neoshamanisms and situating them within the frame of international influence and concerns. It is essential reading for scholars of shamanism/neoshamanism and of the confluence of indigenous/New Age politics in the twenty-first century.” (Robert J. Wallis, The Pomegranate, Vol. 19 (1), 2017)

"This is an important and highly interesting book discussing the scarcely researched area of the Nordic neoshamanistic contemporary religious scene from different empirical and theoretic perspectives. This volume consists of well written contributions by the best scholars of the field, highlighting the intersection between global influences and local traditions, as well as between religion and culture. I would heartily recommend it for both students and scholars alike." - Liselotte Frisk, Professor, Religious Studies, Dalarna University, Sweden