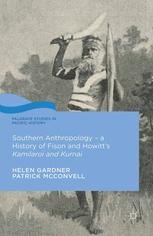 Helen Gardner is an historian of colonialism, anthropology and mission in the Pacific Islands and Australia in the nineteenth and twentieth centuries.

Patrick McConvell is an anthropologist and linguist with particular interests in Indigenous Australia, interdisciplinary prehistory and kinship. He is engaged with the ARC Discovery Project 'Kin and Skin' (AustKin).

“Southern Anthropology presents a history of one of the most important nineteenth-century works on Australia's indigenous peoples, Lorimer Fison and Alfred William Howitt's Kamilaroi and Kurnai, published in 1880. … Southern Anthropology is an impressive example of cross-discipline collaboration that is highly informative for both historians and anthropologists.” (Anje Kühnast, Bulletin of the Pacific Circle, Issue 39, October, 2017)

“I strongly recommend this book as a text to be read widely. It should be mandatory reading for undergraduate anthropology classes. It is engagingly written, comprehensively researched, and cogently argued. The inclusion of a glossary of terms provides an excellent resource touchstone for students unfamiliar with intricate anthropological concepts. Historians especially will find this of value.” (Lynette Russell, Australian Historical Studies, Vol. 48 (1), February, 2017)

“‘Southern Anthropology’ is … an important book and part of a growing body of literature focused on the development of anthropological theory and method in the antipodes at a time when the antiquity and origins of humanity were being keenly debated within the centres of colonial power.” (Jason Gibson, Anthropos, Vol. 112 (2), 2017)