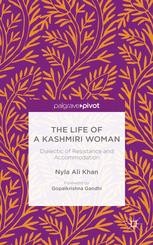 The Life of a Kashmiri Woman

Dialectic of Resistance and Accommodation

Capturing the history of Kashmir and its cultural and social evolution, Nyla Ali Kahn deconstructs the life of her grandmother and other women of her generation to reconceptualize woman's identity in a politically militarized zone. An academic memoir, this book succinctly brings together the history, politics, and culture of Kashmir.

"By bringing women to the centre of Kashmir's political discourse, Nyla Ali Khan has sought to question not merely the academic silence around the gender dimensions of Kashmir's politics but has also sought to challenge the dominant paternalistic notions about the relationship between women and politics. The book is an important contribution from a gender perspective since one does not get to hear the women's side of story in the much analysed history of Kashmir's politics. There seems to be a complete invisibility of woman. It is as if women did not exist or if they did, they did not play any role. If at all the women are portrayed, they are shown as the mute and passive spectators or as victims at the receiving end. What gets missing is their role as agents in their own rights. In her story of Akbar Jehan, Nyla looks for her agential role. 'Her foray into public realm was not due to circumstances beyond her control but was agential', she notes. That said, the book is a very important contribution to the literature on Kashmir's politics. It is one of those rare personal accounts that have been written with academic dexterity." - Rekha Chowdhary, Professor Emeritus of Political Science, University of Jammu, India, Biblio: A Review of Books

"Nyla Ali Khan places her maternal grandmother, Akbar Jehan Abdullah, at the center of a historical inquiry into the unsuccessful, mid-twentieth century independence movement in Kashmir and, in doing so, deconstructs traditional frameworks of understanding about women's agency in social change and the recent history of a politically contentious region located in India near Pakistan. Effectively combining personal memoir, archival research, oral history, and feminist theory, Khan produces a richly textured history of a time and place both beautiful and desperate in its struggle for autonomy from the 1950s to the 1970s. The book is important for its contribution to a collective historical memory of the region and for its deeply honest assessment of what is gained and lost not only by those intimately involved in Kashmir but by all who struggle with the politics of identity." - Linda Van Ingen, Associate Professor of History and Director of Women's & Gender Studies, University of Nebraska, Kearney, USA

"This penetrating biography of Begum Akbar Jehan Abdullah by her granddaughter Nyla Ali Khan stands at the intersection of feminist as well as postcolonial theory and history, taking a hybrid form of memoir, auto/biography, and history that allows the author to probe her own history and subjectivity in the context of familial and Kashmiri historical mileposts and unfolding political developments. With a perspective heightened by distance from her home country and a tone at times tinged with a nostalgia that she herself is wary of, the author paints a loving and personal picture of a powerful woman whose role and actions gave Kashmir a model for women's political action in the critical period before and after the partition of India in 1947." - Catherine Hobbs, Professor of English and Women's and Gender Studies, University of Oklahoma, USA

"Nyla Khan's biography of her grandmother is a valuable exercise in retrieval and reconstruction, a heartfelt stand against the dissolution of Kashmiri history and the mitigation of its sometimes self-inflicted wounds, and a continuation of her ongoing memorialization of the retreating wraiths of her elusive childhood in her oddly claustrophobic summers in the Himalayan foothills of the 1990s. The influence of Akbar Jehan in the Plebiscite Front and the National Conference, and the writing of this account from Khan herself, shine a welcome light on the role of women in Kashmiri self-definition." - John C. Hawley, Professor of English, Santa Clara University, USA

"Nyla Ali Khan presents a hybrid feminist memoir and auto/biography of her grandmother, Begum Akbar Jehan. Jehan was the wife of political advocate, socialist, and first prime minister of the princely state of Jammu and Kashmir, Sheikh Mohammad Abdullah. From a wealthy background, Jehan promoted the overlapping grassroots and nationalist interests of herself and her husband, placing emphasis on women's education. She was a pillar of stability for her husband, children and grandchildren and a representative of Jammu and Kashmir politics whether her husband was in or out of power." - Betty J. Harris, Professor of Anthropology, University of Oklahoma, USA

"This is a brilliant piece of scholarship. The book's content fills a gap in our knowledge about Kashmiri women, Kashmiri history, Kashmiri political identity, and their multilayered interconnectedness. Nyla Ali Khan, using a memoir narrative genre, tells the life story of her grandmother, Akbar Jehan, who was both the wife of the Prime Minster of Kashmir and a politician in her own right. The narrative at one level constructs theory, and method of feminism in diaspora, and at another it invokes the insider's lens and living emotions of a Kashmiri woman towards her country, family, women's conditioning, conflict, the toll of success and failures, conflict, and death. The book is riveting." Nawal H. Ammar, Professor and, Dean Faculty of Social Science and Humanities, University of Ontario Institute of Technology, Canada

"This is a personal, political and devotional biography of a woman to whom the author pays homage while also recording the history of Kashmir through the various political quagmires.Through the biography of her grandmother, Begum Akbar Jahan Abdullah, the author traces the political history of Kashmir and the traumas of the political process. The author through lyrical prose and cultural sensitivity deconstructs the life of her grandmother and other women in her family to situate them as women with agency through a feminist lens." - Huma Ahmed-Ghosh, Professor of Women's Studies, San Diego State University, USA

"Khan's The Life of a Kashmiri Woman personal memories that unpacks the legacy of Kashmiri nationalist and social and political activist, Akbar Jehan. For the first time, we hear the story of the woman next to the man in power, former Prime Minister Sheikh Muhammad Abdullah, highlighting Jehan's agency, voice and determination to make her own contributions to Kashmir's quest for independence and the creation of a secular, pluralist society. Written by her granddaughter, it provides insight into Jehan's character and family dynamics in the midst of contentious politics and intrigues, telling the inside story and challenging the dominant narratives of both hagiographers and critics alike. Unique in its vantage point and poetically written, it is a story of both triumph and heartache that is a tribute to the spirit of love and partnership." - Natana J. DeLong-Bas, Visiting Assistant Professor of the Theology Department & Islamic Civilization and Societies Program, Boston College, USA

"This is the story of Akbar Jehan Abdullah - freedom fighter, wife of Kashmir's first prime minister, and the grandmother of the author of this book - whose life intersected and epitomized Kashmir's tragic political history, often dramatically. Kashmir's political culture and its rich Sufi traditions had a deep, androgynous strain, often a clue to a culture's creativity and access to the human subjectivities. Both faced new challenges once the struggle for a sustainable national identity broke out there towards the middle of the twentieth century. National movements tend to become masculine ventures, more so in societies that were victims of European imperialism and its hyper-masculine ruling culture. In such societies there is often a desperate denial of the feminine principle, which then becomes for the younger generation a marker of non-martial, passive effeminacy. Strangely, Kashmir did not have that serious an engagement with British imperialism. And, but for a confrontation with a relatively lightweight feudal order, from which Akbar Jehan's husband, Sheikh Mohammed Abdullah, emerged a victorious hero, Kashmir's public life has been shaped by two determined nation-states, each convinced that Kashmir belongs to it and, even more important, should not belong to the other. Both India and Pakistan believe that they have a birth right to Kashmir must possess it at any cost, even if it means fighting for Kashmir to the last Kashmiri. Neither has noticed that their prolonged conflict has not only brutalized the Kashmiri youth but also their own polities and turned the whole of South Asia into a playground of global powers and some of the most dangerous non-state actors. Sheikh Abdullah died as the Chief Minister of Kashmir after seeing three India-Pakistan wars, two of which directly involved Kashmir. Akbar Jehan lived another two decades to see Kashmir's worsening plight, its youth militarized, a majority of the families in the valley carrying the burden of bereavement and trauma, an important section of its population, crucial to Kashmir's self-definition ousted from their ancestral land, the social fabric of Kashmir in tatters, with bitterness, terror, cynicism and the army's ugly presence casting dark shadows on the public sphere. Nyla Khan in her various writings has consistently shown her sensitivity to this unfolding tragedy. This time she has a written an affectionate, low-key biography of Akbar Jehan which nonetheless is infused with her own deep, compassionate engagement with Kashmir. Does it prepare the grounds for a return of the feminine? I like to believe so, whatever the hard-eyed strategic analysts might say." - Ashis Nandy, Distinguished Fellow, Centre for the Study of Developing Societies, New Delhi, India