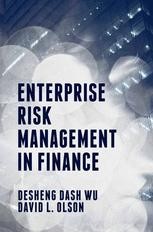 Enterprise Risk Management in Finance is a guide to measuring and managing Enterprise-wide risks in financial institutions. Financial institutions operate in a unique manner when compared to other businesses. They are, by the nature of their business, highly exposed to risk at every level, and indeed employ their own risk management functions to manage many of these risks. However, financial firms are also highly exposed at enterprise level. Traditional approaches and frameworks for ERM are flawed when applied to banks, asset managers or insurance houses, and a different approach is needed. This new book provides a comprehensive, technical guide to ERM for financial institutions. Split into three parts, it first sets the scene, putting ERM in the context of finance houses. It will examine the financial risks already inherent in banking, and then insurance operations, and how these need to be accounted for at a floor and enterprise level. The book then provides the necessary tools to implement ERM in these environments, including performance analysis, credit analysis and forecasting applications. Finally, the book provides real life cases of successful and not so successful ERM in financial institutions. Technical and rigorous, this book will be a welcome addition to the literature in this area, and will appeal to risk managers, actuaries, regulators and senior managers in banks and financial institutions.

David L. Olson is the James & H.K. Stuart Professor in MIS and Chancellor's Professor at the University of Nebraska. He has published research in over 160 refereed journal articles, primarily on the topic of multiple objective decision-making and information technology. He teaches in the management information systems, management science, and operations management areas. He has authored 18 books and is associate editor of Service Business and co-editor in chief of International Journal of Services Sciences. He is a member of the Decision Sciences Institute, the Institute for Operations Research and Management Sciences, and the Multiple Criteria Decision Making Society. He was a Lowry Mays endowed Professor at Texas A&M University from 1999 to 2001. He was named the Raymond E. Miles Distinguished Scholar award for 2002, and was a James C. and Rhonda Seacrest Fellow from 2005 to 2006. He was named Best Enterprise Information Systems Educator by IFIP in 2006. He is a Fellow of the Decision Sciences Institute.

Desheng Dash Wu is an Affiliate Professor and Managing Director with the RiskLab, University of Toronto, Toronto, ON, Canada. He is a 100-plan Full Professor with the University of Science and Technology of China, Chinese Academy of Sciences, Beijing, China. He has published over 80 papers in refereed journals, such as Production and Operations Management, Decision Sciences, Risk Analysis, and the IEEE Transactions on Systems, Man, and Cybernetics. He is the editor of the Springer book series entitled Computational Risk Management. His current research interests include enterprise risk management in operations, performance evaluation in the financial industry, and decision sciences. Dr. Wu has served as an Associate Editor/Guest Editor for such journals as the IEEE Transactions on Systems, Man, and Cybernetics, Annals of Operations Research, Computers and Operations Research, the International Journal of Production Economics, and Omega.

“Enterprise Risk Management in Finance provides a general overview of salient topics in risk management, offering along the way a primer and refresher of sorts on various metrics and techniques. … Enterprise Risk Management in Finance can benefit the practitioner who knows how to use it. … The beginner would do well to stick with the qualitative discussions, which can serve as useful points of departure for further study.” (Marc L. Ross, Financial Analysts Journal, Vol. 11 (1), 2016)