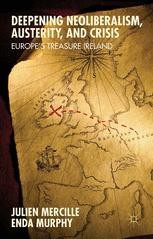 From bank bailouts to austerity, Europe's and Ireland's response to the economic crisis has been engineered specifically to shift the burden of paying for the crisis onto ordinary citizens while investors, financiers, bankers and the privileged are protected. The authors expose the class-based nature of Ireland's crisis resolution.

Julien Mercille is Lecturer at the School of Geography, Planning and Environmental Policy at University College Dublin, Ireland. He has published widely on topics such as the financial crisis, US foreign policy, media studies, and drugs policy from a political economy perspective. His current research interests include political economy, neoliberalism, the mass media and economic crises.

Enda Murphy is Senior Lecturer at the School of Architecture, Planning and Environmental Policy at University College Dublin, Ireland. He has published extensively on the financial crisis, urban planning and noise pollution. His current research interests centre on political economy, neoliberalism, economic crises and crisis resolution.

“Deepening Neoliberalism contributes to the small but growing body of literature that has emerged from academics interested in the impacts of the global economic and financial crisis on Ireland. The book, with its accessible and well-presented theoretical framework and illuminating case studies, makes a valuable contribution to understanding the causes and, particularly, consequences of Ireland’s embrace of neoliberalism.” (David Meredith, Antipode, antipodefoundation.org, February, 2016)

'Essential reading for those who might believe that neoliberalism is just an economic doctrine. This meticulously researched and engagingly written book of Ireland's social and economic predicament conclusively shows that neoliberalization is first and foremost a class project.' Erik Swyngedouw, Manchester University, UK

'The authors construct a compelling case that it was Ireland's cooption of a neoliberal political economy that led to its recent catastrophic crash, yet the solution pursued was a more entrenched version that imposed severe austerity on its citizens to the favour of corporate interests. A must read for anyone interested in the crisis in Ireland and understanding neoliberalism more broadly.' Rob Kitchin, Maynooth University, Ireland

'Essential reading for anyone interested in understanding the nefarious grip of neoliberalism A powerful wake-up call to all who would seek to oppose the class-war policies which neoliberal ideologues have unleashed upon us.' Andrew MacLaran, Trinity College Dublin, Ireland