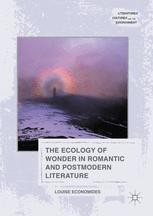 The Ecology of Wonder in Romantic and Postmodern Literature

This book traces the aesthetic of wonder from the romantic period through contemporary philosophy and literature, arguing for its relevance to ecological consciousness. Most ecocritical scholarship tends to overshadow discussions of wonder with the sublime, failing to treat these two aesthetic categories as distinct. As a result, contemporary scholarship has conflated wonder and the sublime and ultimately lost the nuances that these two concepts conjure for readers and thinkers. Economides illuminates important differences between these aesthetics, particularly their negotiation of issues relevant to gender-based and environmental politics. In turn, readers can utilize the concept of wonder as an open-ended, non-violent framework in contrast to the ethos of domination that often surrounds the sublime.

Louise Economides is an Associate Professor at the University of Montana, USA.

“The Ecology of Wonder in Romantic and Postmodern Literature—part of the Literatures, Cultures, and the Environment series, which examines how ideas about nature are communicated in different cultures and in different eras—challenges the Romantic definitions of these aesthetic categories. Economides treats sublimity and wonder as distinct aesthetic concepts.” (Iyad Mukahal, Hungarian Journal of English and American Studies, Vol. 24 (2), 2018)

“A most timely intervention into the art and aesthetics of the sublime. One of the first book-length studies to challenge the domination of modern aesthetics by the sublime and the domination of ecocriticism by “dark ecology,” it promises to outlive the demise of both of these dominants by introducing, archiving, exploring and deploying an alternative, minor aesthetics. …Economides presents the poetic figure of wonder as a vibrant, trans-disciplinary constellation of concepts, percepts and affects.” (Dianne Chisholm, Professor Emeritus of English and Film Studies, University of Alberta, Canada)

“The Ecology of Wonder investigates an impressive range of literary, philosophical, scientific, and popular texts and discourses, making a nuanced case for wonder’s status as an aesthetic category distinct from the sublime.  Focusing in particular on the ways in which wonder informs responses to the more-than-human world, Louise Economides convincingly demonstrates wonder’s potential to generate non-dualistic and non-anthropocentric modes of perception, to welcome the new and the strange, and to provide a promising basis for environmental ethics and ecological advocacy.  Highly compelling, lucidly argued, and beautifully written, this book is an example of ecocriticism at its finest.” (Kevin Hutchings, Professor of English, University of Northern British Columbia, Canada)

“Highlighting the baleful implications and afterlives of the romantic sublime, The Ecology of Wonder nonetheless provides a cogent demonstration of the continuing value of romantic thought and literature to the project of theorising and composing an ecopoetics – whether in the medium of high-tech documentary film or the age-old written word - capable of motivating ecopolitical praxis in the present. This is itself a wondrous book, in which Economides never allows the urgency of the socio-ecological crisis that she discerns to override the need to take the time to think carefully, read closely, and write well, with grace, gravitas and wit.” (Kate Rigby, Professor of Environmental Humanities, Bath Spa University, UK, author of Topographies of the Sacred: The Poetics of Place in European Romanticism (2004) and Dancing with Disaster: Environmental Histories, Narratives, and Ethics for Perilous Times (2015))

Book Title
The Ecology of Wonder in Romantic and Postmodern Literature
Authors
Series Title
Literatures, Cultures, and the Environment
Copyright
2016
Publisher
Palgrave Macmillan US
Copyright Holder
The Editor(s) (if applicable) and The Author(s)