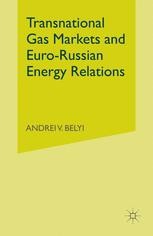 This books analyses how transnational gas markets have evolved and impacted on EU-Russia energy relations. It examines how the political conflict surrounding Ukraine has accelerated a negative interdependence in the region, with energy interdependence increasingly used as an instrument of diplomacy.

“Belyi’s monograph makes an important contribution to the field. It will no doubt find its rightful place both on the book-shelves in officials’ cabinets and in the reading lists of graduate courses on EU-Russian relations and energy studies.” (Dimitar Bechev, Energy Research & Social Science, Vol. 25, 2017)

“This book provides an analysis of how transnational gas markets have evolved and impacted the European Union (EU)-Russia energy relations. … the book is an interesting read for those who wish to understand the intricacies of the gas markets in the EU-Russian energy context.” (Rafael Leal-Arcas, OGEL, April, 2016)

"An insightful and lucid account of the way in which politics and economics exert their influence on Europe's gas market. Belyi's book cuts through the complexity with a powerful theoretical framework backed up with ample factual support. A must-read for anyone interested in Russia's role in Europe's energy future." - Edward Lucas, The Economist, United Kingdom

"This is an important book, because it connects two trends that are usually considered separately: the recentralization of gas as an instrument of Kremlin policy and the rise of a new legal and regulatory framework within the European Union. The collision between these two has profoundly destabilized the Russian-European gas trade and contributed to the present geopolitical crisis. This is an insightful and timely analysis of a major policy issue." - Thane Gustafson, IHS Energy and Georgetown University, United States