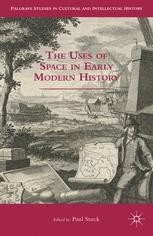 The Uses of Space in Early Modern History

While there is an growing body of work on space and place in many disciplines, less attention has been paid to how a spatial approach illuminates the societies and cultures of the past. Here, leading experts explore the uses of space in two respects: how space can be applied to the study of history, and how space was used at specific times.

'This book is a very welcome intervention into the latest round of engagements between history and historical geography prompted by spatial and cultural turns across the humanities. By examining how far space is a fundamental dimension of both historical interpretation and of life in the past, these essays play an important part in fulfilling the project signalled by Michel Foucault when he wrote that 'A whole history remains to be written of spaces which would at the same time be a history of powers from the great strategies of geo-politics to the tiny tactics of the habitat.' As a result, The Uses of Space in Early Modern History shows us both the geographies we have lost as well as uncovering those that are familiar to us as they came into being.' - Miles Ogborn, Professor of Geography, Queen Mary University of London, UK, and Editor of The Journal of Historical Geography

"With the sometimes zealous calls for historians to take space more seriously, it is refreshing to read a multidisciplinary collection that is by turns illuminating, coolly persuasive, but also sceptical about the significance of space. The essays by well-established and emerging scholars range from vernacular houses, parish churches and scientific academies to imperial border zones, cities, and microregions. Rather than rehearsing the empty mantra that 'space matters,' The Uses of Space in Early Modern History ably demonstrates both the potential for historical study in this area and the vibrancy of older historiographic traditions often forgotten amid the quickening interest in the 'spatial turn.'" - David Lambert, Reader of Caribbean History, University of Warwick, UK

"A formidable line up, including established heavyweights in the reconceiving of mainline history like Michael Heffernan and Lauren Benton, are sure to draw readers, while the variety of cutting-edge subjects like borderlands would make this book useful for graduate students coming to grips with the emerging field of spatial history." - Jo Guldi, Hans Rothfels Assistant Professor of the History of Britain and its Empire, Brown University, USA