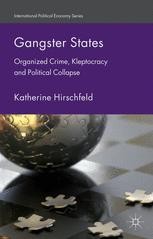 The author draws on behavioral ecology to predict the evolution of organized crime in unregulated systems of exchange and the further development of racketeer economies into unstable kleptocratic states. The result is a new model that explains the expansion and contraction of political-economic complexity in prehistoric and contemporary societies.

Katherine Hirschfeld is an associate professor at the University of Oklahoma, USA. She received her PhD in Anthropology from Emory University in 2001. Her research interests include the political economy of health, disease ecology and post-Soviet transitions. Among her previous publications figures the monograph Health, Politics and Revolution in Cuba since 1898 (2007).

“Hirschfeld … has produced a gem of a work that is both multidisciplinary in its approach and intellectually seductive. Within the context of traditional organized crime studies, its amoral analytics may be viewed as highly disruptive–almost heretical–in nature. Contrarian and well executed works such as this should be greatly valued for their ‘out of the box’ perspectives and ability to shake up what can at times become an insular and dogmatic discipline.” (Robert J. Bunker, Trends in Organized Crime, June, 2016)

"This innovative and engaging book provides ananthropologist's assessment of some of the problems besetting much of the developing world." - Robert I. Rotberg, Journal of Behavioral and Experimental Economics, 2015, 49(6)

“Gangster States is a gem, an intellectually exhilarating synthesis of political anthropology, political economy, and Darwinian evolutionary theory. The result is a concise, elegant argument that makes the scales drop from our eyes, regarding not only gangs like the Mafia and Mexican drug cartels, but the origins of the state, the vulnerability of democracies to racketeering, and the relentless reemergence of groups like ISIS and Boko Haram. In effect we go from gang to state and back again. In place of the partial approaches of neoliberal economics and conventional political anthropology, Hirschfeld offers a comprehensive and powerful new theory of organized politics as organized crime. It is a theory we ignore at our peril.” (Melvin Konner, Emory University, USA)