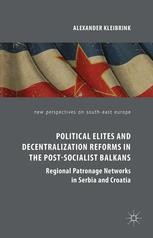 Political Elites and Decentralization Reforms in the Post-Socialist Balkans

Across the globe, more powers are being devolved to local and regional levels of government. This book provides an innovative analysis of such decentralisation in transition states in the Balkans. Using new and rich data, it shows how political elites use decentralisation strategically to ensure their access to state resources.

Alexander Kleibrink is Senior Fellow at the European Research Centre for Anti-Corruption and State-Building and Associated Fellow at the Free University Berlin. He has been working on regional development, innovation policy and open governance, and has engaged in several projects on good governance.

“The monograph is a useful and welcome work in several respects. It offers a fresh take on decentralisation studies, shifting away from ethnically-centred discussions on decentralisation … . the study is a refreshing and important one. The shift of focus towards the agency of the political elites, and in particular towards a resources-driven framework, is much needed; for anyone familiar with the region … .” (Tena Prelec, Europe-Asia Studies, Vol. 69 (6), 2017)

“There are several reasons to recommend Alexander Kleibrink’s Political Elites and Decentralization Reforms in the Post-Socialist Balkans to anyone interested in the politics of decentralization in Europe. … The analytical core of the book is a comparison of decentralization reforms in Croatia and Serbia, or more specifically of the devolution of powers to two historical regions within each country – Istria in Croatia and Vojvodina in Serbia.” (Vera Šćepanović, Regional Studies, July, 2016)

'This exemplary study shows why decentralization reforms have different outcomes: Elites condition their support on whether such reforms offer greater access to electoral and patronage resources, and fewer constraints on distributing them. The book draws on groundbreaking field research revealing just how parties use decentralization to control jobs and fill their coffers. It is a hugely important contribution to the study of comparative politics, post-communist democratization and Southeastern Europe.' Milada A. Vachudova, Professor of Political Science, University of North Carolina, USA

'This book sheds an important light on the dynamics of decentralisation in Eastern Europe and more generally brings in novel theoretical insights on the role of informal elite interactions in moulding the pace and scope of decentralization reforms.' Wilfried Swenden, Senior Lecturer of Politics, University of Edinburgh, UK

'Decentralization reforms are popular in post-conflict societies. But what explains the willingness of national elites to invest in such reforms? Alexander Kleibrink develops a novel theoretical argument to this important question. His in-depth local knowledge allows him to assemble an impressive array of empirical evidence. This book is a must read for scholars interested in decentralization and regionalism, Balkan politics specialists, and also a note of caution for those uncritically advocating transfer of powers to subnational units.' Petr Kopecký, Professor of Political Science, Institute of Political Science, Leiden University, The Netherlands