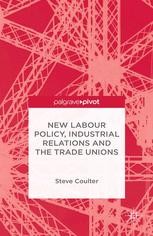 New Labour was outwardly hostile to trade unions and their concerns. Yet the Blair government worked closely with the TUC on several key employment reforms. Steve Coulter analyses the dimensions of the often fractious Labour-union partnership and shows how the TUC pursued an 'insider lobbying' route to influence the shape of New Labour's policies.

Steve Coulter is LSE Fellow in the Political Economy of Europe at the London School of Economics, UK.

"This is a sophisticated yet highly readable account of relations between unions and political parties in today's hard economic times. The conclusion is important: neither centre-left politicians nor organised labour are prisoners of globalisation, but remain crucial political actors in the quest for a balance between efficiency and social justice." Bob Hancké, London School of Economics, UK

"It is often argued that trade unions now wield very little influence over governments in liberal market economies. Steve Coulter's original and highly readable research study of the New Labour period in the UK suggests, on the contrary, that with the appropriate leadership and strategy, unions remain a significant political force." John Kelly, Birkbeck, University of London, UK