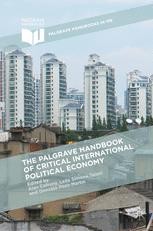 Challenging the assumptions of ‘mainstream’ International Political Economy (IPE), this Handbook demonstrates the considerable value of critical theory to the discipline through a series of cutting-edge studies. The field of IPE has always had an inbuilt vocation within Historical Materialism, with an explicit ambition to make sense, from a critical standpoint, of the capitalist mode of production as a world system of sometimes paradoxically and sometimes smoothly overlapping states and markets. Having spearheaded the growth of a vigorous critical scholarship in the 1960s and 1970s, however, Marxism and neo-Gramscian approaches became increasingly marginalized over the course of the 1980s. The authors respond to the exposure of limits to mainstream contemporary scholarship in the wake of the onset of the Global Financial Crisis, and provide a comprehensive overview of the field of Critical International Political Economy. Problematizing socioeconomic and political structures, and considering these as potentially transitory and subject to change, the contributors aim not simply to understand a world of conflict, but furthermore to uncover the ways in which purportedly objective analyses reflect the interests of those in positions of privilege and power.

Alan Cafruny is Henry Platt Bristol Professor of International Affairs at Hamilton College, USA, and former Visiting (1993-4) and External (1994-2000) Professor at the European University Institute, Italy. In 2013-14 he was Fulbright Scholar at the Higher School of Economics National Research University in Moscow, Russia. Alan has written numerous books and articles in the areas of international political economy, the political economy of the European Union and U.S. foreign policy.

Leila Simona Talani is Professor of International Political Economy at the Department of European and International Studies, Kings College London, UK, where she was appointed Jean Monnet Chair of European Political Economy in 2012. She has previously held posts at the London School of Economics and the University of Bath, UK, and was Associate Expert for the United Nations Regional Office for Drug control and Crime Prevention in Cairo, Egypt. Simona has written extensively on European political economy, the political economy of international migration, and on the Economic and Monetary Union.

Gonzalo Pozo Martin is an independent researcher associated with the ‘Vision of Eurasia’ project, based at Södertörn University, Stockholm, Sweden. He was previously Lecturer in International Political Economy at the Department of European and International Studies, King’s College London, and Lecturer in International Relations at Goldsmiths College, University of London.  He has also held University of London posts at SOAS and Birkbeck College. His work has concentrated on the Marxist Theory of Imperialism, geopolitics, and Russian foreign policy and political economy.