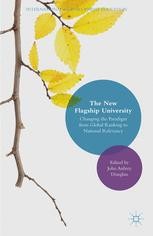 Changing the Paradigm from Global Ranking to National Relevancy

The New Flagship University is an expansive vision for leading national universities and an alternative narrative to global rankings and World Class Universities. The Flagship model explores pathways for universities to re-shape their missions and operational features to expand their relevancy in the societies that gave them life and purpose.

“Douglass and the other involved authors offer a very rich and differentiated picture of the university and its many facets, a refreshing perspective in contrast to the often emphasized narrative of rankings and world class universities. … this book is a much needed alternative to the current paradigm of university excellence, interesting to read and well written, as well as a promising narrative both for future research and policymaking … .” (Philipp Friedrich, European Journal of Higher Education, March, 2017)

"Global league tables have imposed a new tyranny on major research universities. Even, perhaps especially, the most highly ranked are in their thrall. They have to conform ever more closely to a restricted (and restrictive) idea of the 'world-class university' global norms that supposedly apply everywhere but actually fit nowhere. New paradigms of success are desperately needed. John Douglass' new book articulates an imaginative new concept of the 'flagship university', at once excellent according to all academic measures but rooted in meeting the real needs of their societies." - Peter Scott, UCL Institute of Education, UK; former Vice Chancellor at Kingston University, UK, and Editor of the Times Higher Education Supplement

"Over the past millennium, universities have thrived through a process of continual renewal. Prophecies that they would succumb to new institutions, new technologies, and new demands have not been fulfilled. In this age of globalization, universities are not luxuries but are central to societies around the globe for the creation and communication of knowledge, the application of technologies, and the cultivation of leadership. John Douglass's new work is most welcome, as it provides important perspectives on the future of higher education around the world, underlining the essential role of the modern, flagship university."- Vartan Gregorian, President of the Carnegie Corporation of New York and former President of Brown University, USA"Throughout much of the world, global rankings of universities and similar markers of prestige have an outsize influence on ministerial policies and institutional behaviors. In an innovative and groundbreaking manner, The New Flagship University provides a much needed reboot, profiling and explaining the actual policies and practices, and expansive mission, of the best and most influential global universities." - Nicholas Dirks, Chancellor UC Berkeley, California, USA
Show all