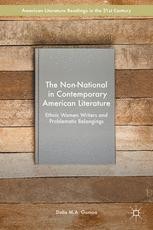 The Non-National in Contemporary American Literature

In this wide-ranging study, Gomma examines contemporary migrant narratives by Arab-American, Chicana, Indian-American, Pakistani-American, and Cuban-American women writers. Concepts such as national consciousness, time, space, and belonging are scrutinized through the "non-national" experience, unsettling notions of a unified America.

Dalia M.A. Gomaa is an Associate Lecturer of Women Studies at the University of Wisconsin—Milwaukee, USA.

“The book proposes the concept of ‘imagined transnational communities’ and positions Arab American literature as a field that can broaden, deepen, and complicate the meaning of Americanness. Gomaa’s study will be of particular relevance to scholars of multiethnic studies, American studies, Arab American studies, and women’s studies.” (American Literature, Vol. 89 (3), September, 2017)

"Dalia M.A. Gomaa's important new book alters the map of the 'new' American Studies by incorporating Arab American writers into the unfolding story of American transnationalism, multiculturalism, migration, and racialization. She develops her comparative theory of the 'non-national' from an archive of women writers in the US from Arab, Chicana, Cuban, and South Asian—writers whom she resists collapsing into the single category 'women of color,' insisting instead on their sharp differences along with their shared contrapuntal engagements beyond the nation-state. This book makes a valuable contribution to American Studies, Gender Studies, and Migration Studies." - Susan Stanford Friedman, Professor of English, University of Wisconsin-Madison, USA

"Long absent from conversations about women of color in the US, Gomaa firmly places Arab American women writers in conversation with South Asian American and Latina women writers. This innovative work offers a much-needed comparative framework, highlighting an imagined transnational consciousness that resists identifications with a single nation, and proposing new temporal and spatial alternatives. Arab American women become central to understanding the complex ways in which women of color negotiate identity and belonging." - Evelyn Alsultany, Associate Professor of Arab and Muslim American Studies, The University of Michigan, USA

"Deploying transnational and feminist approaches, Gomaa's study offers engaging commentaries on eight contemporary novels by Arab American, Chicana, South Asian-American, and Cuban-American women authors. In analyzing one Arab American novel in each chapter against a narrative from one of the other three traditions, Gomaa examines the sites of ambivalence these texts occupy. In the process, Gomaa reorients our sense of how the 'imagined community' morphs into the 'transnational community,' even as she reads Arab American Literature into the larger circles of meaning in US Studies." - Amritjit Singh, Langston Hughes Professor of English, Ohio University, USA

"This is a brilliantly conceptualized and splendidly executed analysis of the postnational and non-national condition in the US as manifested in the literary works of ethnic American women writers juxtaposed with Arab-American women authors. This highly original and theoretically sophisticated scholarly study offers exceptional insights into the construction of national as well as non-national identities in our twenty-first-century transnational and globalized world." - Maria Herrera-Sobek, Associate Vice Chancellor and Professor of Chicana/o Studies