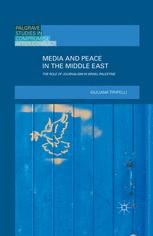 Media and Peace in the Middle East

The Role of Journalism in Israel-Palestine

In exploring the dynamics and narratives of peace in journalism, this book explains the media's impact on the transformation of the conflict between Israelis and Palestinians. It discusses the perspectives of peace activists who have been involved in grassroots action since the first Intifada, and examines how their relation with the mainstream media has evolved over time. It compares these views with those of professional journalists who have been covering the conflict, and their sense of the difficulties inherent in practicing a different kind of journalism. The interviews included in this study contribute towards the model of Peace Journalism, with a view to facilitating its successful application to this conflict. Highlighting both the obstacles and opportunities associated with this endeavour, Tiripelli offers suggestions for the strategic application of this model.

“In this thought-provoking book, Tiripelli explicitly sets out to underscore the role of grassroots peace voices in transforming dominant media narratives that justify and perpetuate the Israel–Palestine conflict. … Media and Peace in the Middle East does offer a transformative model linking media with social change, and might definitely be of interest to scholars from various interdisciplinary fields dealing with the constitutive role of discourse in effecting social change, conflict resolution studies, educational discourse and social change.” (Dalia Gavriely-Nuri, Discourse & Society, Vol. 29 (2), 2018)
“Giuliana Tiripelli discusses the power and the role of the media in the Israeli–Palestinian conflict. … this book deals with the very complex topic of the Israeli–Palestinian conflict as it tries to explain the role of journalism or rather peace journalism in it. The ideas postulated in this book constitute an ideal project to make peace journalism a substantial and tangible contribution to this decades – long conflict … .” (Nataša Bakić-Mirić, European Journal of Communication, Vol. 32 (06), 2018)

“This important book by Giuliana Tiripelli takes the scholarship of Peace Journalism to a new level. Tackling a complex set of interlocking research questions with an ambitious interdisciplinary approach, she ably interweaves a rich stream of idiographic detail with passages of theoretical exposition that are admirable in depth and clarity. The result is an account that is as satisfying in its granularity as it is impressive in its conceptual scope.” (Jake Lynch, Director of the Centre for Peace and Conflict Studies)

“For academics, students, and journalists, Media and Peace in the Middle East is a sorely needed, in-depth study of how Peace Journalism applies in the Israeli-Palestinian setting. The theoretical foundation Tiripelli lays out is spot on, particularly the notions that news coverage lacks context, is unbalanced, and can be seen as a series of tendencies (standard narratives) and distortions, including the use of inflammatory language. The book provides an excellent overview about the grassroots peace movements and its often-strained relationship with the media.  In fact, Tiripelli breaks new ground in the analysis of this “tug of war” relationship, especially in the discussion of what media portrayals would be most effective in laying the groundwork for transformative change. … Media and Peace in the Middle East is an outstanding addition to the study of media in general and Peace Journalism specifically.” (Steven Youngblood, Director of the Center for Global Peace Journalism)

“Too often scholarship in the field of media communications remains steadfastly fixed on the deficiencies of contemporary journalism, especially when reporting conflicts. Critical sights become focused on what is problematic and not what is possible and, sometimes, already progressively performed by journalists. Giuliana Tiripelli’s detailed study provides a welcome and detailed analysis of the complexities and contingencies as well as constraints and controls enacted in and through journalism and the reporting of Israel-Palestine. This is an important, empirically rich and theoretically nuanced study and it will prove of interest to all those interested in peace journalism and the news media’s roles and responsibilities in the furtherance of peace in the Middle East.” (Professor Simon Cottle, School of Journalism, Media and Cultural Studies, Cardiff University)

“This inspiring new book reveals the unheralded importance of "peace journalism" to creating a groundwork for political and social breakthroughs within Israeli and Palestinian societies without which no peace involving fundamental reconciliation by both sides will be possible. Tiripelli offers a powerful defense of the role of progressive journalism in its coverage of the Israeli-Palestinian conflict, demonstrating clearly how  a self-understood peace journalism is inherently progressive, creating and sustaining links between various social actors in the two societies whose interactions are crucial actualizing grass roots visions of peace that can then help to shape the media landscape in a positive manner, promoting a vision of peace and justice that motivates  citizens on both sides to take the risks for peace that increasingly cynical, and elite/establishment dominated traditional journalism has long frustrated. After reading this book, you will have a much better appreciation of how the political weltanschauung of the reporters covering--and making--the news shapes the possibilities for rapprochement the news attempts to clarify. It is a usually vicious circle from which we would do well to break free.” (Mark Andrew Le Vine, Modern Middle Eastern History, University of California)

“It is indisputable that the mass media play a very determinative role in the shaping the view of society members involved in intractable conflict such as an Israeli-Palestinian one. The book Media and Peace in the Middle East sheds light on how media acts, is perceived by peace activists, and by journalists. This is a very interesting and important illumination that adds to the various explanations about the events of 1990s and the beginning of 2000s that determined the present state of the Israeli-Palestinian conflict. Of special value is the discussion of the peace journalism that suggests to the journalists to fulfil their role in a constructive and useful way that influences also the conflict process in advancing peace. Thus Tiripelli's research and analysis is not only a contribution to the understanding of the past, but also a lesson of how to change the future.” (Daniel Bar-Tal, Emeritus Professor at the School of Education, Tel Aviv University; served as a President of the International Society of Political Psychology and received various awards for his work)

“Giuliana Tiripelli's book is particularly valuable because she moves beyond the identification of media bias to point to a possible ideal journalism that can also contribute to peace and social change. Her detailed analysis of journalism in the field reviews important dilemmas of the profession, and includes practical insights and suggestions for developing a strategy that can help practitioners to move in a new direction. Actively setting out to bring academics, peace activists and reporters into a dialogue, this is a very important contribution to the ongoing search for better reporting from the Middle East.” (Joris Luyendijk, journalist and writer, author of “People like us: Misrepresenting the Middle East” (2009))