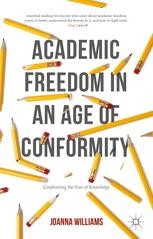 Academic Freedom in an Age of Conformity

Confronting the Fear of Knowledge

Academic freedom is increasingly being threatened by a stifling culture of conformity in higher education that is restricting individual academics, the freedom of academic thought and the progress of knowledge – the very foundations upon which academia and universities are built.

Once, scholars demanded academic freedom to critique existing knowledge and to pursue new truths. Today, while fondness for the rhetoric of academic freedom remains, it is increasingly criticised as an outdated and elitist concept by students and lecturers alike and called into question by a number of political and intellectual trends such as feminism, critical theory and identity politics.

This provocative and compelling book traces the demise of academic freedom within the context of changing ideas about the purpose of the university and the nature of knowledge. The book argues that a challenge to this culture of conformity and censorship and a defence of academic free speech are needed for critique to be possible and for the intellectual project of evaluating existing knowledge and proposing new knowledge to be meaningful. This book is that challenge and a passionate call to arms for the power of academic thought today.

Joanna Williams is Director of the Centre for the Study of Higher Education at the University of Kent, UK and Education Editor for Spiked Online. She has previously published Consuming Higher Education: Why Learning Can't be Bought.

“Joanna Williams, in her powerful study, argues that academic freedom has become at best a second-order value in our universities. … Any academic who fails to read Williams’ book will remain an unreflective conformist or, to put it another way, will not be an academic.” (Dennis Hayes, British Journal of Educational Studies, Vol. 67 (2), April, 2017)

"At a time when campuses both in the United States and Britain increasingly see academic freedom under threat both from within and without, we need scholars to provide lucid, clearly written, and scholarly explanations of both where our traditions of academic freedom came from and why they matter so much. Joanna Williams has done precisely that in her new book Academic Freedom in the Age of Conformity. Williams' new book is essential reading for anyone who cares about academic freedom, wants to better understand the threats to it, and how to fight back." - Greg Lukianoff, author of Freedom From Speech and Unlearning Liberty

"This is a must read for anyone concerned about the future of freedom inside and outside the university. Joanna Williams provides a compelling account of why academic freedom is in trouble. A powerful but nuanced study of the conformist campus." - Frank Furedi, author, commentator and Emeritus Professor of Sociology, University of Kent, UK

"A sophisticated history and analysis of the rise and recent fall of academic freedom. Joanna Williams offers an accessible, scholarly account of the assault on reason and free inquiry by identity politics and the denigration of knowledge. Academic culture today combines relativism with an absolute conviction in the validity of subjective truths, Williams explains. What's lost is the moral and epistemological modesty that enables learning and the free exchange of ideas.' - Wendy Kaminer, lawyer, social critic and author of Worst Instincts: Cowardice, Conformity and the ACLU