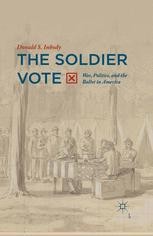 War, Politics, and the Ballot in America

The Soldier Vote tells the story of how Americans in the armed forces gained the right to vote while away from home. The ability for deployed military personnel to cast a ballot was difficult and often vociferously resisted by politicians of both political parties. While progress has been made, significant challenges remain. Using newly obtained data about the military voter, The Soldier Vote challenges some widely held views about the nature of the military vote and how service personnel vote.

Donald S. Inbody is Senior Lecturer of Political science at Texas State University, USA. He served at sea in the United States Navy for 28 years, retiring as a Captain. He holds a PhD in Government from the University of Texas. His research interests center on military voting behavior, particularly that of enlisted personnel. He and his wife, Jeannine, live in Buda, Texas.

"The Soldier Vote fills a key gap in our knowledge of the workings of American democracy. Both historical and contemporary, it examines the changing and imperfect fit between a national army and voting laws that are largely shaped by the states. There is much value here for anyone wishing to know more about the political rights, views, and participation of the men and women in our uniformed services." - Alexander Keyssar, Stirling Professor of History and Social Policy, Harvard University, and author of The Right to Vote: The Contested History of Democracy in the United States (2009)

"This is a thoughtful study of the American military's experience with voting. I learned a great deal from it, and anyone seeking to understand this important dimension of civil-military relations will find this an invaluable reference." - Peter Feaver, Professor of Political Science and Public Policy, Duke University

"Donald Inbody has written a superb account of the history, politics, and current reality of voting by US military officers and enlisted personnel. Through its combination of close historical study, political analysis, and original empirical research, The Soldier Vote documents the uneven evolution of suffrage for military personnel from the founding to the present, discusses the controversies and politics surrounding voting by military personnel, and reveals what major issues remain to be addressed. Voting by active duty personnel constitutes a crucial part of American civil-military relations, and the author, a political scientist and retired US Navy captain, is the perfect person to undertake this study." - Bartholomew H. Sparrow, Professor and Associate Chair of Government, The University of Texas at Austin, USA

"Combining long-term historical insights on soldiers' absentee voting in the United States with fine-grained statistical analysis of more recent military voting and political preferences, Inbody has crafted a unique, well-written scholarly contribution. The Soldier Vote challenges our assumptions about military members and veterans as a monolithic voting bloc and provides a great deal of evidence linking the historical interests in maintaining electoral participation for military personnel during times of war with the long-term democratic project. This makes The Soldier Vote required reading for those interested in the evolution of participatory democracy in the US, and in the status of civil-military relations. A wonderful, sophisticated, and timely study." - Stephen R. Ortiz, Associate Professor of History, Binghamton University (SUNY), author of Veterans' Policies, Veterans' Politics: New Perspectives on Veterans in the Modern United States (2012)

"The Soldier Vote is a comprehensive analysis of how and why military personnel gained the right to vote. The interdisciplinary book corrects misperceptions on military voting and bridges a gap between American politics and civil-military relations theory." Derek S. Reveron, author of America's Viceroys (2004) and Faculty Affililate, Belfer Center for Science and International Affairs

"Donald Inbody has written a fascinating history of the struggle over The Soldier Vote one that will engage both the scholar and the interested lay reader. Students of American History will appreciate the window into how US federalism and separation of powers have functioned (or not); students of civil-military relations will applaud the focus on enlisted personnel; and all of us should be grateful for the nuance he brings to the issue of partisanship in the military." - Lindsay Cohn, Senior Assistant Professor, National Security Affairs, Naval War College

'As a member of the US military, Professor Inbody brings unique insight to this study of the political attitudes and orientations of members of our armed services. Perhaps more importantly, he brings an intriguing theoretical approach borrowing from sociology and organizational theory and a fantastic and comprehensive array of survey data detailing the attitudinal differences between enlisted personnel and officers, blacks and whites and Hispanics, men and women, and younger and older personnel. This research adds considerably to the nascent literature on military attitudes.' - Daron Shaw, Professor of Government, University of Texas

Book Title
The Soldier Vote
Book Subtitle
War, Politics, and the Ballot in America
Authors
Copyright
2016
Publisher
Palgrave Macmillan US
Copyright Holder
The Editor(s) (if applicable) and The Author(s)