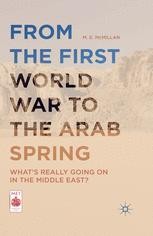 From the First World War to the Arab Spring

What's Really Going On in the Middle East?

Offering a comprehensive, up-to-date examination of the complex web of wars and proxy wars, revolutions and counter-revolutions that are ripping the Middle East apart, this book puts these events in their historical context and leads readers through the labyrinth that is the new Middle East.  This book seeks answers to pressing, contentious questions.  Why are there so many hereditary heads of state in the Middle East when the Prophet Muhammad did not appoint a successor?  Why do Western countries claim to want democracy in the Middle East, yet support dictators?  Why did Israel become a democracy while the Arab states did not?  Why are there so many wars in the Middle East?  And, most importantly, what happened to the hope and optimism of the Arab Spring?  M.E. McMillan offers fresh answers to these difficult questions.  Firmly grounded in historical research and insightful analysis of current events, this book gives readers a new understanding of what’s really going on in the Middle East.

M. E. McMillan is author of Fathers and Sons: The Rise and Fall of Political Dynasty in the Middle East and the acclaimed The Meaning of Mecca: The Politics of Pilgrimage in Early Islam. She has worked as a translator for the United Nations in New York and Geneva.

“This book is an enjoyable read, one that would satisfy a large range of readers. … a succinct, well written and engaging narrative, offering a clear and lucid discussion of the last 100 years. As such, this work will be certainly beneficial for general readers and undergraduate students.” (Roberto Mazza, First World War Studies, Vol. 9 (3), August, 2019)

“McMillan effortlessly stimulates readers by retelling how a contingent event or one person’s small decision has surprisingly altered and significantly sealed the fate of the Middle East from the outbreak of the First World War. … Nevertheless, From the First … Middle East? remains an invaluable addition to the field of Middle East Studies and democratization studies. … the unique contribution of this book should also be of interest to scholars in the field of the Global South.” (Wai Yip Ho, Bandung: Journal of the Global South, December, 2018)

“The book’s wealth of historical and contextual background allows for an empirically rich analysis of the major historical events.  McMillan has produced a work of exceptional lucidity that scholars, students and policy makers alike will consult for years to come. It is a valuable contribution to academia as well as highly recommended reading for the generalist, who will find it compelling and informative.” (Ahmed Sajjad, Middle East Policy, Vol. 24 (3), 2017)

“I would certainly recommend it. It is clear, well written and accurate, but above all balanced and sympathetic, and a great place to start.” (Hugh Kennedy, Times Higher Education, timeshigherededucation.com, May, 2016)

“M. E. McMillan has written a cultural and political history with the clear and objective language of unbiased journalism. … McMillan succeeds admirably in presenting readers with a complete yet concise briefing on the last fifteen hundred years. … It is a truly brilliant piece of writing.” (Hubert O’Hearn, San Diego Book Review, sandiegobookreview.com, December, 2015)

“Understanding the Middle East is a subject that occupies us all, but might seem at first to be an impossible task.  The intractability of the issues, current and historic, almost defy explanation.  M. E. McMillan is an historian and commentator of extraordinary courage in tackling the issues in an effort to help us cut though the propaganda.  Her impeccable objectivity helps us through the sometimes deadly maze of Middle East politics.  Her book is essential reading for historians, commentators, politicians, academics, in fact anyone touched by events in the region.” (Michael Grade, former chairman of the BBC and member of the House of Lords, UK)

“The significance of this book lies in its contextualization of the Arab Spring uprisings and the legacies of the First World War, as well as in its analysis of how these large-scale ruptures have shaken the modern Middle Eastern state system to its foundation.” (Fawaz A. Gerges, Emirates Chair of Contemporary Middle Eastern Studies, London School of Economics and Political Science, UK, and author of Contentious Politics in the Middle East)

“M.E. McMillan successfully throws light on why the disasters that engulf the Middle East grow worse by the day. She does this in a series of brief, stimulating essays that challenge the reader to think hard about the topics she discusses. She clearly cares deeply about the area's problems, and those reading the book will be enlightened and will finish up sharing her cares. Well worth a close read!” (Alan Jones, Emeritus Professor of Classical Arabic, University of Oxford, UK)

“Sweeping in scope and meticulous in coverage, From the First World War to the Arab Spring: What's Really Going on in the Middle East? is essential reading for anyone seeking an in-depth understanding of the historical evolution of the modern Middle East. Wonderfully written, M.E. McMillan captures the full magnitude of the social, political, and economic forces that have transformed the Arab world and redefined its position within the global order. McMillan has produced a work of exceptional lucidity that scholars, students, and policymakers alike will consult for years to come.” (Kristian Coates Ulrichsen, Fellow of the Middle East, Baker Institute at Rice University, USA, and author of The Gulf States in International Political Economy)

“M.E McMillan's timely book From the First World War to the Arab Spring: What's Really Going on in the Middle East? judiciously puts the current creative crisis in the region in a necessary historical context, pulling us back to the inaugural year of 1914 when the continued legacy of European imperialism was yielding to the rising global American power and the transition framing the eventual formation of postcolonial nation-states that seem to be crumbling right in front of our eyes today. More critical and informed studies like McMillan's are much needed if the cascade of the daily news is not to dull the edge of our critical thinking ahead in an increasingly tumultuous and yet ultimately liberating historical moment.” (Hamid Dabashi, Hagop Kevorkian Professor of Iranian Studies and Comparative Literature, Columbia University, USA, and author of Being a Muslim in the World)

“To begin understanding why the Middle East is falling apart today, read M.E. McMillan's beautifully written and admirably succinct book From the First World War to the Arab Spring: What's Really Going On in the Middle East? She unravels with verve the clash of empires that preceded the violent dismantling of the Ottoman Empire during World War I. But most importantly, she analyzes with clarity the contradictory principles and conflicting interests that were embedded in the new Middle East. Not only were borders drawn haphazardly at war's end, but also the Great Powers insisted that Middle Eastern peoples take on new identities. Enlightenment concepts such as nationalism, constitutionalism, and separation of church and state were imposed at the point of a gun. Today, that order is in shambles, despite or perhaps because of multiple interventions. McMillan is a wonderful guide. I will be assigning it to my students.” (Joshua Landis, Director of the Centre for Middle Eastern Studies and Associate Professor at the College of International Relations, University of Oklahoma, USA)