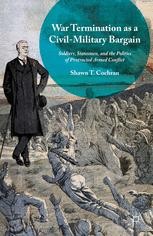 War Termination as a Civil-Military Bargain

Soldiers, Statesmen, and the Politics of Protracted Armed Conflict

War termination reflects a civil-military bargain and affects relevant decisions made by political leaders. For the leader embroiled in protracted war, this risk dictates whether he or she will commit more resources to the fight or else cut the state's losses and get out.

Shawn T. Cochran is Professor of Strategy and Security Studies at the U.S. Air Force School of Advanced Air and Space Studies.

'This is an important book. Effectively bringing together the issues of civil-military relations and war termination, Cochran offers a novel theoretical argument and then evaluates it with convincing empirical analysis. Beyond its scholarly significance, the book also promises to make a contribution to understanding critical real world decisions about war termination.' - David M. Edelstein, Professor of Government, Georgetown University, USA, and author of Occupational Hazards: Success and Failure in Military Occupation (2008)

'A thoughtful and insightful analysis of the civil-military politics shaping an important aspect of war termination: the so-called 'blame game.' This is a valuable contribution to the larger mosaic of civil-military relations and the use of force.' - Peter D. Feaver, Professor of Political Science and Public Policy, Duke University and author of Armed Servants (2003)

'Cochran's study is a superbly written and theoretically grounded analysis of the bargaining between civilian and military leaders in the context of protracted armed conflict, with particular relevance to the context of 'small' or asymmetric wars. Based on a novel theory of blame attribution and the domestic politics of war, and supported by careful quantitative and case study analyses, the author's conclusions about the patterns of civilian-military interactions in war termination decision-making are intriguing and compelling. This is essential reading for those interested in war termination from both theoretical and practical perspectives and will be a valuable addition to graduate and advanced undergraduate courses in civil-military relations and security policy. I highly recommend War Termination as a Civil-Military Bargain.'

'Shawn T. Cochran tackles an important and timely question: when will states decide to cut their losses and withdraw from costly, protracted wars? He argues persuasively that the key factor driving this decision is a bargaining process between civilian and military leaders. This concise and insightful book challenges prevailing popular opinion and existing scholarship on the topic, and will surely be of great interest to political scientists, military historians, and policymakers alike.' Lindsey O'Rourke, Professor of International Politics, Boston College, USA

"In the last decade, the United States has extricated itself from two wars with great difficulty. Shawn T. Cochran's insightful book-deeply rooted in history, analytically careful, sensitive to the politics of narrative and authority-sheds light on war's end through the lens of civil-military relations. This is a valuable and original addition to the growing body of literature of war termination." - Ronald R. Krebs, Professor of Political Science, University of Minnesota, USA and author of Narrative and the Making of US National Security (2015)

'Shawn T. Cochran's original and insightful work significantly advances our understanding of the domestic politics of war termination and its linkage to civil-military relations. His analysis shows how civil-military bargaining influences the political narrative, and thus the risk calculus of political leaders in wartime. The author advances a new conceptual framework of ideal types for the assignment of blame within the context of failed wars. According to Cochran, civil-military bargaining acts as an important influence for all political leaders in wartime but especially for new leaders, those who come to power after the start of a war. The author makes interesting counter-intuitive arguments, including that new leaders remain at risk for being blamed and punished for a failed war someone else started. Cochran also challenges the widely accepted argument that civilians will be more committed to ending a protracted war than military leaders, and the related assumption that protracted wars are more likely in states with weak civilian control over the armed forces. This study is highly recommended for academic and military professional readers and others interested in how wars end.' - Stephen J. Cimbala, Professor of Political Science, Pennsylvania State University, USA and author of Arms for Uncertainty: Nuclear Weapons in US and Russian Security Policy (2013)

'In this extremely timely study, Shawn T. Cochran offers a new perspective on why ending protracted wars is so difficult. His nuanced argument, emphasizing the effects of civil-military relationships and the politics of blame attribution, is a valuable contribution with which scholars of war termination, civil-military relations, and foreign policymaking more generally will need to grapple.' - Ryan Grauer, Professor of International Affairs, University of Pittsburgh, USA