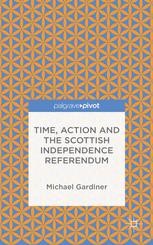 Time and Action in the Scottish Independence Referendum

This book describes the recent Scottish independence referendum as the latest incarnation of a contest between two times on one hand, an ideally continuous time beyond determination underpinning financial sovereignty, on the other the interruptions to this ideal continuity inherent in human action.

Michael Gardiner is Professor in the Department of English and Comparative Literary Studies, University of Warwick, UK.

"There have been diaries and accounts of the referendum movement but none that give the depth of analysis that Michael Gardiner brings to the table. Britain as the Undead state, re-telling the movement as part of a narrative of British reform - and trying to capture the idea of self-determination, thereby cancelling both past and future for Scotland. It's a captivating insightful analysis of what we've just lived through. Essential reading." Mike Small, editor of Bella Caledonia

"Gardiner is perhaps the expert in analysing Scoto-British politics from a culturalist angle. In Britain Undead he argues that the populist movement for Scottish democracy, reignited during debates leading up to the 2014 independence referendum, has awoken and radically challenged the centuries-old constitutional reaction at the heart of the neoliberal Anglo-British state." Dr Scott Lyall, Edinburgh Napier University, UK

'A timely provocation on the flattened, empty and 'zombie' temporalities of UK constitutional thinking. For Gardiner the spectre of Scottish independence disrupts a British financial and political order instated beyond history and human determination an action-canceling machine whose very permanence is figured as ceaseless 'reform'. A polemic as suggestive as it will prove contentious. Dr Scott Hames, University of Stirling, UK