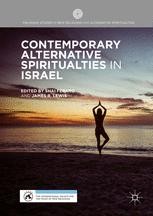 This volume is the first English-language anthology to engage with the fascinating phenomena of recent surges in New Age and alternative spiritualties in Israel. Contributors investigate how these New Age religions and other spiritualties—produced in Western countries within predominantly Protestant or secular cultures–transform and adapt themselves in Israel. The volume focuses on a variety of groups and movements, such as Theosophy and Anthroposophy, Neopaganism, Channeling, Women’s Yoga, the New Age festival scene, and even Pentecostal churches among African labor migrants living in Tel Aviv. Chapters also explore more Jewish-oriented practices such as Neo-Kabballah, Neo-Hassidism, and alternative marriage ceremonies, as well as the use of spiritual care providers in Israeli hospitals. In addition, contributors take a close look at the state’s reaction to the recent activities and growth of new religious movements.

Shai Feraro is a PhD student at Tel Aviv University’s School of Historical Studies, Israel. He acts as Secretary of the Israeli Association for the Study of Religions. His scholarly interests lie in the connection between new religions and gender issues, and he specializes in the study of Neopaganism in North America, Britain, and Israel.

James R. Lewis is an extensively published scholar in the fields of new religious movements and religion and violence. He is currently Professor of Religious Studies at the University of Tromsø, Norway.

“Its strength is in providing a valuable resource both as an introduction for interested readers as well as a starting point for deeper scholarly explorations. Its regional focus on Israel might serve as an example for the production of similar volumes focusing on other social, political, and cultural contexts.” (Dominic Zoehrer, Religious Studies Review, Vol. 45 (2), June, 2019)

“Much has been written on traditional Jewish religion, but little on present-day alternatives in Israel. This volume is a fascinating and lucidly written collection of essays spanning a range of new forms of spirituality and new expressions of ancient faiths. The anthology is a highly valuable resource, both for the general reader and for subsequent researchers who decide to explore the field further.” (George D. Chryssides, York St John University, UK)

“This volume is an important contribution to the study of New Age in Israeli society. The anthology, the first of its kind in English, includes studies of diverse topics such as New Age Judaism, Spiritual care in medical organizations, the attitude of the state to New Religious Movements, Channeling, and other aspects of contemporary spirituality. The volume highlights the transformation, adaptation, and reaction to contemporary western spirituality in Israel and offers an important contribution to the study of the local and global aspects New Age culture.” (Boaz Huss, The Goldstein-Goren Department of Jewish Thought, Ben-Gurion University of the Negev, Israel)