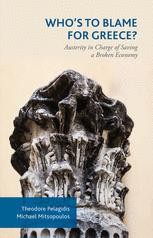 Who’s to Blame for Greece?

Austerity in Charge of Saving a Broken Economy

Theodore Pelagidis is a non-resident senior fellow at the Brookings Institution, USA, and Professor of Economics at the University of Piraeus, Greece. He has also been a NATO scholar at the Center for European Studies at Harvard University, USA; an NBG fellow at the London School of Economics, UK; and a Fulbright professorial fellow at Columbia University, USA. He also has served as an expert to the International Monetary Fund in the Independent Evaluation Office, USA.

Michael Mitsopoulos holds a PhD in Economics from Boston University, USA. He is an economist at the Hellenic Federation of Enterprises, Greece, and has taught at the University of Piraeus and the Economic University of Athens, Greece. He has published extensively in academic journals and is the co-author with Pelagidis of Understanding the Crisis in Greece: From Boom to Bust (Palgrave, 2011) and of Greece: From Exit to Recovery? (2014).

'The new book by Michael Mitsopoulos and Theodore Pelagidis offers insightful analysis of the Greek drama. It makes fascinating reading and well demonstrates that the blame is widely shared.'

'Who is to blame for Greece? If I could pick just two experts on the Greek debacle to answer this question it would be Theodore Pelagidis and Michael Mitsopoulos. And thankfully they have done just that in this penetrating analysis of what has happened to Greece over the past five years. It's a timely and incisive work and no one gets off easy a must read.'

'With their customary mix of political savvy and sound economic analysis, Pelagidis and Mitsopoulos separate truth from myth in the great debate about the causes of the Greek crisis. As usual, no one is spared: Greece's leaders before the fall, its official creditors since 2010 and the chaotic SYRIZA-led coalition all get their fair share of the blame for the still-unfolding disaster.'

Yannis Palaiologos, author of The 13th Labour of Hercules