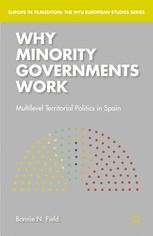 This book is an examination of minority government performance in conjunction with the territorial distribution of state power and the territorial interests of political parties. It examines political institutions, and the reconcilability of party goals and the contingent bargaining circumstances, in multilevel and territorial perspectives.

Bonnie N. Field (PhD Political Science) is Associate Professor in the Global Studies Department at Bentley University, USA. She has been a Visiting Scholar at the Center for European Studies at Harvard University, USA, Visiting Researcher at the University of Barcelona, Spain, Faculty Fellow at the University of California, Irvine, USA, and Fulbright Senior Researcher in Spain. Her publications focus on political parties and institutions in Europe and Latin America.

“The author makes a very significant documentation effort through personal interviews with the politicians of each period. … this book clearly advances our understanding of how well minority parliamentary governments can govern, how they build parliamentary majorities and, most importantly, why some perform better than others. … This is an important book for those interested in minority governments and coalition politics, and for readers keen on Spanish politics in particular.” (Sergi Ferrer, International Journal of Iberian Studies, Vol. 31 (2), 2018)

'In this intriguing and insightful book, Bonnie N. Field show us that minority governments are not simply a feature of the Nordic countries, or of unstable and fragmented party systems. Field demonstrates that minority cabinets have been as common and stable in Spain as in the Nordic area, and that the territorial dimension of Spanish politics has been of critical importance to their success. This is an excellent contribution to the study of coalition politics that highlights the complexity of parliamentary bargaining and the unexpected accommodations that often result.' - Kaare Strøm, Distinguished Professor of Political Science, University of California, San Diego, USA

'Minority governments can result from the rational choice of parties in pursuit of their multiple goals. However, we have few studies that show how these governments emerge and how they actually govern. This book shows in detail how Spanish minority governments work. In the process, it makes a significant theoretical contribution to the literature on how minority governments operate, highlighting the importance of subnational arenas, and the bargaining opportunities they provide, for understanding government formation and survival at the national level. This is an excellent example of a theoretically motivated in-depth case study.' - José Antonio Cheibub, Professor of Political Science, University of Illinois at Urbana-Champaign, USA

'Bonnie N. Field tells the story of how Spanish minority governments were supported by some regional parties by exchanging offices and policies at different levels of government. Minority rule was not always efficient, but it was made viable through a multidimensional policy space and by institutional tools restraining the control of the government by the parliament. The book provides an impressive accumulation of data and insights that will be indispensable for any further study of Spanish politics.' - Josep M. Colomer, Research Professor, Georgetown University, USA