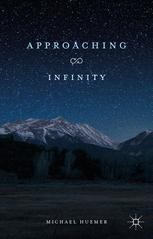 Approaching Infinity addresses seventeen paradoxes of the infinite, most of which have no generally accepted solutions. The book addresses these paradoxes using a new theory of infinity, which entails that an infinite series is uncompletable when it requires something to possess an infinite intensive magnitude. Along the way, the author addresses the nature of numbers, sets, geometric points, and related matters.

The book addresses the need for a theory of infinity, and reviews both old and new theories of infinity. It discussing the purposes of studying infinity and the troubles with traditional approaches to the problem, and concludes by offering a solution to some existing paradoxes.

Michael Huemer received a B.A. from UC Berkeley and a Ph.D. from Rutgers University. He is presently a full professor at the University of Colorado, where he has taught since 1998. He has published three single-author scholarly books, one edited anthology, and more than fifty academic articles in epistemology, ethics, political philosophy, and metaphysics. His articles have appeared in such journals as the Philosophical Review, Mind, the Journal of Philosophy, Ethics, and others. Michael's first book, Skepticism and the Veil of Perception, significantly advanced the theory of Phenomenal Conservatism in epistemology, which is now considered one of the leading theories of justified belief and is the focus of the recent anthology, Seemings and Justification (Oxford, 2013). His second book, Ethical Intuitionism, is one of the leading contemporary defenses of ethical intuitionism and of moral realism more generally. It has been assigned as course reading by two colleagues at my own university, in addition to philosophers at the University of Massachusetts at Amherst, Lafayette College, Huron University College, Syracuse University, and Princeton University. It was the subject of a book symposium in Philosophy and Phenomenological Research. Michael's most recent book, The Problem of Political Authority, was published in 2013.

“Huemer writes books that are well-argued and thought-provoking; it seems that each reader has to find for him/herself how far this variegated discussion leads to an improvement of the current state of affairs.” (Michel Weber, zbMATH 1426.03004, 2020)
“Michael Huemer’s new book Approaching Infinity squarely takes on problems related to understanding the infinite. … Huemer’s book is indeed a very good contribution to the study of the infinite. … Huemer’s book gives a challenging and well thought out account of the infinite. His presentation is one that will surely engage anyone interested in this topic. … Approaching Infinity should be required reading for anyone with an interest in this fascinating topic.” (Biagio Gerard Tassone, dialectica, Vol. 71 (2), June, 2017)

“Approaching Infinity is entertaining and competently written. It is recommended to anybody who finds the puzzles of the infinite intrinsically interesting, but also to those who think that the paradoxes of the infinite were totally tamed by Aristotle or contemporary mathematics.” (Christopher M.P. Tomaszewski, The Review of Metaphysics, Vol. 71 (3), 2017)