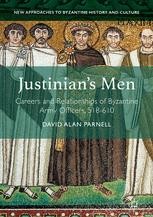 This book explores the professional and social lives of the soldiers who served in the army of the Byzantine Empire in the sixth century. More than just a fighting force, this army was the setting in which hundreds of thousands of men forged relationships and manoeuvred for promotion. The officers of this force, from famous generals like Belisarius and Narses to lesser-known men like Buzes and Artabanes, not only fought battles but also crafted social networks and cultivated their relationships with their emperor, fellow officers, families, and subordinate soldiers. Looming in the background were differences in identity, particularly between Romans and those they identified as barbarians. Drawing on numerical evidence and stories from sixth-century authors who understood the military, Justinian’s Men highlights a sixth-century Byzantine army that was vibrant, lively, and full of individuals working with and against each other.

David Alan Parnell is Assistant Professor of History at Indiana University Northwest, USA. He has published numerous journal articles on the sixth-century Byzantine Empire and is also an award-winning teacher.

“Parnell has produced an innovative inquiry on the Byzantine army, adding a new kind of approach to the large bibliography on the subject, interesting for both Byzantine studies and general military history.” (Alexandru Madgearu, Speculum, Vol. 95 (2), 2020)

“The strength of this book is that it uses social network theory plus an in depth analysis of the literary sources to assess the impact of social relationships behind military operations and the often-fraught relationship between general officers and emperors. … This book is easy to read and is useful not only for understanding the relationships between the military and the imperial government in late antiquity but also for a source for military history in general.” (Elizabeth Buchanan, Bryn Mawr Classical Review (BMCR), bmcr.brynmawr.edu, March 27, 2019)

“Parnell’s book gives a magisterial sketch of the key aspects of the Eastern Roman or Byzantine army in the sixth century. Readers will be especially keen to make use of the material he discusses as well as his case-studies … .” (MISCHA MEIER, English Historical Review HER, Vol. 134 (566), February, 2019)