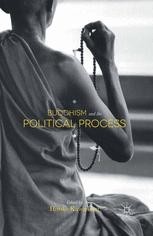 Buddhism and the Political Process

This study examines the impact of Buddhism on the political process of Asian countries in recent times. The intersection between Buddhism and politics; religious authority and political power is explored through the engagement of Buddhist monks and lay activists in the process of nation-building, development, and implementation of democracy.

Hiroko Kawanami is Senior Lecturer in the Department of Politics, Philosophy and Religion at Lancaster University, UK. She has co-edited Religions in the Modern World (2009, 2016) and Buddhism, International Relief Work, and Civil Society (2013), and is the author of Renunciation and Empowerment of Buddhist Nuns in Myanmar-Burma (2013). She is currently co-writing a book about the communal jurisdiction of non-ordained Buddhist nuns in the southern tradition.

“This is an important and scholarly collection of case studies – a fitting memorial to Ian Harris – which should finally put to bed the notion that there can only be one kind of relationship between Buddhism and politics, namely, avoidance and pacifist moral guidance.” (David N. Gellner, Professor of Social Anthropology, University of Oxford, UK)

“These essays cover a wide range of cases from throughout the Buddhist world and show that from statecraft to rebellion, Buddhist activists have been engaged in all levels of public life. This is an essential book for anyone concerned about the role of religion in politics around the globe.” (Mark Juergensmeyer, Professor of Sociology and Global Studies, University of California, Santa Barbara, USA)

“The contributions … demonstrate well that Buddhism has had a long history of adapting to, shaping, and reacting to political authority as well as occasionally fostering true detachment from such authority.” (Charles Keyes, Professor Emeritus of Anthropology and International Studies, University of Washington, USA)