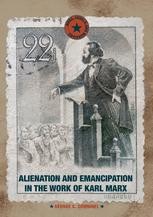 Alienation and Emancipation in the Work of Karl Marx

This book considers Karl Marx’s ideas in relation to the social and political context in which he lived and wrote. It emphasizes both the continuity of his commitment to the cause of full human emancipation, and the role of his critique of political economy in conceiving history to be the history of class struggles. The book follows his developing ideas from before he encountered political economy, through the politics of 1848 and the Bonapartist “farce,”, the maturation of the critique of political economy in the Grundrisse and Capital, and his engagement with the politics of the First International and the legacy of the Paris Commune. Notwithstanding errors in historical judgment largely reflecting the influence of dominant liberal historiography, Marx laid the foundations for a new social theory premised upon the historical consequences of alienation and the potential for human freedom.

George C. Comninel is Professor of Political Theory in the Department of Politics at York University, Canada. He is the author of Rethinking the French Revolution: Marxism and the Revisionist Challenge (1987), as well as articles and chapters on feudalism, the politics of the French Revolution, and Marx’s thought.

“With such balanced prose and precise argumentation there are few words fit for purpose other than to declare that with Alienation and Emancipation in the Work of Karl Marx, George Comninel has produced a simply exquisite book. Without hyperbole, it ranks among some of the finest scholarship I have encountered in the past decade.” (Scott Timcke, Marx and Philosophy, June 12, 2020)
“This is a skilled and dedicated work of scholarship that will serve anyone interested in deeper engagement with Marx’s works in their own terms very well. … the lively style and illuminating historical analysis will provide fresh insights for readers of all levels of familiarity with the First International’s best known thinker.” (Jules Joanne Gleeson, Tribune, July 8, 2019)

“With this comprehensive book, George Comninel builds on the best of Marx’s major writings and political initiatives, while identifying mistaken and problematic aspects of his theoretical and political legacy. Comninel’s long-standing commitment to improving and developing historical materialism has thus yielded an enormous contribution to social theory, historical sociology and political economy, while providing crucial guidelines for class formation and socialist strategy in our time.” (Leo Panitch, Professor Emeritus, York University, Canada, and Co-editor, Socialist Register)

“This work is a penetrating analysis of the fate of Marxism in the 20th and 21st Centuries. George Comninel both describes the distortion of Marxism in Stalinist Russia and the post-Soviet rebirth of Marxism in the 21st Century led predominantly by the recognition of the Hegelian influence on Marx. All those interested in the contemporary revival of Marxism are required to read this book.” (Norman Levine, Professor Emeritus, University of Maryland Baltimore County, USA)

“By locating Marx’s works in the historical context, George Comninel has provided in this book an insightful interpretation of the development of Marx’s ideas of alienation and emancipation through the critique of political economy as well as a persuasive articulation of the tension between the liberal ideas retained in Marx’s works and Marx’s own historical materialist approach to history.”(Zhang Shuangli, Professor, Fudan University, China)

Book Title
Alienation and Emancipation in the Work of Karl Marx
Authors
Series Title
Marx, Engels, and Marxisms
Copyright
2019
Publisher
Palgrave Macmillan US
Copyright Holder
The Editor(s) (if applicable) and The Author(s)