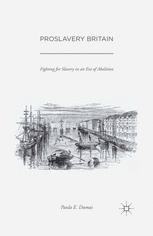 Fighting for Slavery in an Era of Abolition

This book tells the untold story of the fight to defend slavery in the British Empire. Drawing on a wide range of sources, from art, poetry, and literature, to propaganda, scientific studies, and parliamentary papers, Proslavery Britain explores the many ways in which slavery's defenders helped shape the processes of abolition and emancipation. It finds that proslavery arguments and rhetoric were carefully crafted to justify slavery, defend the colonies, and attack the abolition movement at the height of the slavery debates.

Paula E. Dumas received her Ph.D. in history from the University of Edinburgh, UK. The University selected her work on proslavery arguments for the Jeremiah Dalziel Prize in British History.

“The book consists of three parts. The introduction and opening chapter present proslavery positions from economic, strategic, historicist, legalistic, paternalistic, moral, and religious points of view. … there is much here to interest scholars of slavery, abolition, and emancipation, as well as anyone interested in the history of political lobbying, and the book offers a very useful starting point for future studies of British proslavery.” (Brycchan Carey, American Historical Review, Vol. 122 (2), April 2017)

“As scholarly focus on Britain's era of colonial slavery continues to grow, Paula Dumas has provided a valuable and wide-ranging analysis of pro-slavery advocacy in the age of abolition. This book reminds us that while the slave-owners lost the battle over abolition, they won the war over racial subordination.”-Nicholas Draper, Co-director of Structure and Signification of British Caribbean Slave-ownership 1763–1833 project, University College London, England
“Comprehensive in its range and focus, Proslavery Britain offers a fascinating insight into proslavery arguments and rhetoric during the eighteenth and nineteenth centuries. This painstaking study promises to reshape our understanding of slavery debates in Britain, not least through its attention to things such as proslavery arts and culture. We have long needed a book of this kind and Dumas has risen to the task magnificently.”-John Oldfield, Professor of History, Wilberforce Institute for the study of Slavery and Emancipation, University of Hull, England