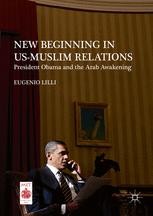 President Obama and the Arab Awakening

This book carries out a comparative study of the US response to popular uprisings in the Middle East as an evaluation of President Barack Obama’s foreign policy commitments. In 2009, Obama publicly pledged “a new beginning in US-Muslim relations,” causing eager expectation of a clear shift in US foreign policy after the election of the 44th president of the United States. However, the achievement of such a shift was made particularly difficult by the existence of multiple, and sometimes conflicting, US interests in the region which influenced the Obama administration’s response to the popular uprisings in five Muslim-majority countries: Egypt, Bahrain, Yemen, Libya, and Syria. After providing a detailed analysis of the traditional features of both US foreign policy rhetoric and practice, this book turns its focus to the Obama administration’s response to the 2011 Arab Awakening to determine whether Obama’s foreign policy has indeed brought about a new beginning in US-Muslim relations.

Eugenio Lilli is a Teaching and Research Fellow at King’s College London, UK, where he received his PhD from the War Studies Department. He also founded and chairs the US Foreign Policy Research Group at King’s College. His analyses have appeared on many news outlets including Al-Jazeera International and The Daily Telegraph.

“In this clear, richly researched, and compelling book, Eugenio Lilli demonstrates that President Obama’s Middle Eastern policies reflect ‘Liberal Talk, Realist Thinking.’ In a wide-ranging study, which includes analysis of the recent Arab uprisings, Lilli argues that there was no re-setting of America’s relationship with the Middle east. On the contrary, US policy under Obama remained largely continuous with those of his predecessors, Republican and Democrat.” (Prof. Inderjeet Parmar, Chair and Head of Department, Obama Research Network, City University London, UK)

“President Obama came to power riding a wave of expectation and declaration. He declared his approach to the creation of American foreign policy towards the Middle East would be different, and many Americans and citizens in other countries, especially the Middle East, expected it would be so. In a deeply researched, stimulating, and convincing study of American foreign policy in that region during the Obama administration, Eugenio Lilli challenges the idea of significant change actually taking place. Focusing on determining the reality of action versus rhetoric and on issues of hypocrisy infused into American foreign policy for the region over a long period of time, Lilli exposes the continuity of Obama's approach, rather than any dramatic shift in policy.” (Prof. Greg Kennedy, Director of the Corbett Centre for Maritime Policy Studies, King's College London at the Joint Services Command and Staff College Defence Academy of the United Kingdom, UK)

“This is an interesting book addressing one of the most difficult areas of Barack Obama’s foreign policy: the relationship between the United States and the Greater Middle East. Eugenio Lilli engages successfully with foreign policy theory and notions of American exceptionalism, realism, socioeconomics, and realism while always considering the key theme of the balance between core strategic national interests and the promotion of ideal national interests. There has been much written on Obama’s foreign policy; this book skillfully brings together much of that analysis with a unique perspective which will enable readers to gain a clearer understanding of very complex events.” (Andrew Moran, Associate Professor of International Relations and University Teaching Fellow, London Metropolitan University, UK)