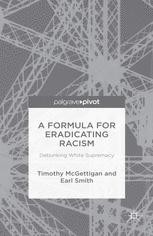 A Formula for Eradicating Racism

In this book, Tim McGettigan and Earl Smith make the unprecedented argument that racism is a remediable form of suggestion-induced sadism. The authors explain in plain terms how societies like the USA construct racism, and put forward a practical plan to eradicate racism in the USA and all over the world.


"Smith and McGettigan tackle a monumentally important question: can racism be eradicated? Relying on up-to-date data and solid theoretical arguments, they answer the question in the affirmative." - Eduardo Bonilla-Silva, author of Racism Without Racists (2003); Professor of Sociology and Department Chair, Duke University, USA

"In their tour-de-force treatment on the cure to racism, 'a social-psychological disorder with an extremely high mortality rate,' the authors set out to eradicate white supremacy by attacking it with a calculus of hard-nosed common sense. Their thesis may change lives, may become second nature to some future, more fully functional, more evolved society." - David Keplinger, author of The Most Natural Thing (2013); Professor of Literature, American University, USA

"McGettigan and Smith have fulfilled their mission of debunking myths on race and are to be seriously taken by readers who want to be in the vanguard of vanquishing the pernicious and pestilential myths on race and racism." - Cecil Bodibe, Professor and Leader at WAMCILT Consulting, South Africa

"A compelling book. Terrific! Just terrific. It clearly and convincingly repudiates that there are 'Others' who are inferior, and challenges us to find our best selves. A call to action to 'fight for the kind of scientific truths that will uplift humanity.'" - Bill Thiebaut, Colorado House of Representatives Member from 1987-1993; Colorado Senate Member from 1993-2002; Colorado Senate Majority Leader from 2001-2002; Pueblo District Attorney from 2005-2012

"McGettigan and Smith's book boldly breaks down the myriad of myths regarding race. Their concepts and examples are a perfect fit for my work with students." - Gary Dukes, Vice President for Student Affairs, Western Oregon University, USA