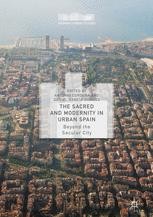 The Sacred and Modernity in Urban Spain

Beyond the Secular City

This book explores how modernity, the urban, and the sacred overlap in fundamental ways in contemporary Spain. Urban spaces have traditionally been seen as the original sites of modernity, history, progress, and a Weberian systematic disenchantment of the world, while the sacred has been linked to the natural, the rural, mythical past origins, and exemption from historical change. This collection problematizes such clear-cut distinctions as overlaps between the modern urban and the sacred in Spanish culture are explored throughout the volume. Placed in the periphery of Europe, Spain has had a complex relationship with the concept of modernity and commonly understood processes of modernization and secularization, thus offering a unique case-study of the interaction between the modern and the sacred in the city.

“Religious studies are a critical but rarely explored area in Spanish cultural studies. At a time when secularity is in crisis, and religious ideas crop up in unexpected places, this volume is a timely, much-needed contribution that should pave the way for further explorations of the interplay between the secular and the religious in contemporary Spanish culture.” (Angel Loureiro, Professor of Spanish and Portuguese Languages and Cultures, Princeton University, USA)

“The Sacred and Modernity in Urban Spain offers, through innovative research and critical thinking, an in-depth analysis of the persistence of the sacred in a secular society. Engaging in excellent dialogue with some of the most important thinkers and cultural historians of religion, urban studies, political theory, and modernity, the essays in this collection open up new areas of cultural and theoretical inquiry about Spanish society and culture. This is a major contribution.” (Cristina Moreiras-Menor, Professor of Spanish and Women's Studies, University of Michigan, USA)

“This collection on representations of cities in Spain is new and engaging. Each essay interrogates the conventional wisdom of ‘the sacred’ as exclusive to pre-modern urban space  . . .  these essays have encouraged me to re-think the very notion of modernity and pre-modernity.” (Michael Ugarte, Professor Emeritus, University of Missouri, USA)