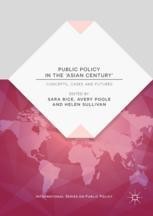 This volume explores the defining features, critical approaches, challenges and opportunities for public policy in the ‘Asian Century’. This is the first book to systematically analyse the key institutions and practices that comprise public policy, administration and governance to investigate how they are changing in the context of increasing Asian influence. Its authors argue that the Asian Century holds the potential to generate a paradigm shift equivalent to the impacts of neo-liberalism and the New Public Management of the late 20th century.
Divided into three parts, this volume interrogates the theories underpinning contemporary public policy; explores case studies from different policy arenas across the Asian region; and imagines what a future of globalised public policy might look like. It examines the implementation measures necessary to support policy and administration in an era of transnational governance networks, tightly linked economic markets and progressively fluid cultural exchanges. This book provides the concepts and tools necessary to navigate these shifting sands successfully. It is essential reading for scholars of public policy, public management, international relations, and politics and social sciences, as well as for administrators and public servants.

“This book provides an important and distinctive contribution to the study of public policy and public administration. It does so in multiple ways. First, by effectively combining both Asian and ‘Western’ intellectual lenses in studying policy and administration in Asia, hence speaking to diverse audiences in a most effective way. Second, by examining in an integrated way policy and administration, as any in-depth knowledge and understanding of one presupposes the other. Third, by looking both to the past, in search of the long-term explanations of distinctive reform trajectories, and to the future, putting in context the ‘Asian century’ argument. A must read.” (Edoardo Ongaro, Professor of Public Management, The Open University, UK)

“As this book explains, the concept of an Asian Century is not so much a reflection of the impending reality, as a completion of the circle; before the rise of the oceanic empires, China remained re-eminent for millennia. And in order to understand that, alongside the rise of other Asian powers, the book skilfully juxtaposes the impact of history, ideology and culture together with the technical and economic innovations harnessed by the huge Asian markets whilst the world tilts eastwards. Asia is disparate, compare China and India to The Maldives and Myanmar to understand the differences, but this book is an excellent guide to the way in which Asian powers are asserting themselves and what this may mean for understanding public policy in the Asian century.” (Andrew Massey, Professor of Politics, University of Exeter, UK)

“Based on high-level theory and research, Public Policy in the 'Asian Century' is essential reading for everyone interested in the implications of the contemporary rise of China and modernization other Asian nations for public policy, governance, globalization, and western approaches to political, economic, and social organization. The editors and contributors have fashioned an outstanding volume that provides a deep understanding of what the 'Asian Century' might be and why it potentially may open a new chapter in human civilization. If one had the opportunity to read only a single book on how China and Asia more generally might change the world by mid-century, this would be an excellent choice.” (David H. Rosenbloom, Distinguished Professor of Public Administration, American University, USA)