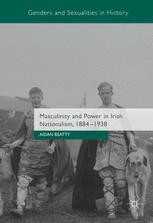 This book is a comparative study of masculinity and white racial identity in Irish nationalism and Zionism. It analyses how both national movements sought to refute widespread anti-Irish or anti-Jewish stereotypes and create more prideful (and highly gendered) images of their respective nations. Drawing on English-, Irish-, and Hebrew-language archival sources, Aidan Beatty traces how male Irish nationalists sought to remake themselves as a proudly Gaelic-speaking race, rooted both in their national past as well as in the spaces and agricultural soil of Ireland.  On the one hand, this was an attempt to refute contemporary British colonial notions that they were somehow a racially inferior or uncomfortably hybridised people. But this is also presented in the light of the general history of European nationalism; nationalist movements across Europe often crafted romanticised images of the nation’s past and Irish nationalism was thus simultaneously European and postcolonial. It is this that makes Irish nationalism similar to Zionism, a movement that sought to create a more idealized image of the Jewish past that would disprove contemporary anti-Semitic stereotypes.

Aidan Beatty is Postdoctoral Research Fellow at the Azrieli Institute of Israel Studies and Scholar-in-Residence at the School of Canadian Irish Studies at Concordia University in Montreal, Canada.

Show all
Reviews
“Aidan Beatty’s insightful and compelling monograph … makes bold strides in addressing the acknowledged lack of investigations into gender and, more specifically, masculinities in modern Irish history. … This is a history that will be of great interest to scholars of gender and sexuality, but it is also a good story well told for those with broader interests in Ireland’s past, particularly during those ever-important decades that defined Ireland’s manly sense of self for the rest of the twentieth century.” (Jane McGaughey, The Canadian Journal of Irish Studies, Vol. 42, 2019)
“This volume will find appreciative readers not only within Irish and Zionist studies, but in fields more broadly concerned with questions of nationalism and gender. For those concerned with the practical value of work on history, this book's publication is all the more important when one considers not only the centenary of the Irish revolutionary period, but more significantly, the rise of sexist nationalism around the globe.” (Charles Clements, breac.nd.edu, October, 2017)
“This comparative analysis of Irish nationalism and Zionism has a compelling narrative drive. In its treatment of territory, language and state ethos, an interpretative audacity on questions of gender is chastened only by sound scholarly scruple and a tremendous archival rigour. The work is done on that difficult but challenging borderland between cultural and historical studies. It will prompt many exponents of colonial and postcolonial theory to review many of their assumptions.” (Declan Kiberd, author of Inventing Ireland: The Literature of the Modern Nation)

“Beatty provides an innovative analysis of masculinized nationalism in Ireland. By unpacking key Irish case studies he demonstrates how the circulation of “muscular” ideals constructed a “proper” political manhood in Ireland. His approach—which includes a thoughtful comparison with Zionism—serves as a model for future historical studies of manhood and nation.” (Sikata Banerjee, author of Muscular Nationalism:  Gender, Violence, and Empire in India and Ireland)