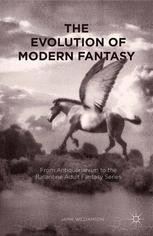 The Evolution of Modern Fantasy

From Antiquarianism to the Ballantine Adult Fantasy Series

In this comprehensive study, Williamson traces the literary history of the fantasy genre from the eighteenth century to its coalescence following the success of Tolkien's work in the 1960s. While some studies have engaged with related material, there has been no extended study specifically exploring the roots of this now beloved genre.

Jamie Williamson is Senior Lecturer at the University of Vermont, USA.

“It’s a masterful study that deservedly won the 2016 Mythopoeic Scholarship Award in Myth and Fantasy Studies. … The Evolution of Modern Fantasy may be defined as a history of that territory up to the time that the dotted line was drawn. … Williamson has offered more than enough both of thoughtful consideration of the history of fantasy and of identification of books beyond Carter to read.” (David Bratman, Mythlore, Vol. 35 (1), 2016)

"The emergence of fantasy as a modern literary genre makes for a fascinating story, and Williamson's is the best account of it I've ever read. He's particularly good at showing how Tolkien provided a center around which the genre of modern fantasy coalesced, and how Ballantine's Adult Fantasy Series played a key role in establishing the fantasy canon." - John D. Rateliff, author of The History of The Hobbit

"The Evolution of Modern Fantasy provides a long-needed critical background to the popular Ballantine Adult Fantasy series (1969-1974), whose seventy-odd titles defined fantasy literature for a generation. Williamson skilfully and comprehensively discusses both the historical trends which led to the development of this remarkable flowering of a newly defined genre, as well as covering the burgeoning field's most important examples." - Douglas A. Anderson, editor of The Annotated Hobbit

"This book is the definitive history of the evolution of the fantasy genre in English. Tracing fantasy from its roots in the 18th century to its efflorescence in the post-Tolkien era, Williamson's sensitive and insightful study is important not only for in-genre analysis, but for the larger scholarly project of understanding the dynamics of literary evolution." - Michael Drout, Professor of English, Wheaton College, USA