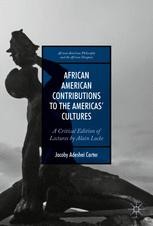 A Critical Edition of Lectures by Alain Locke

This book is a critical edition of six lectures by Alain Leroy Locke, the intellectual progenitor of the Harlem Renaissance. In them, Locke offers an Inter-American philosophical account of important contributions made by Afrodescendant peoples to the art, literature, and culture of various American societies. Locke offers a prescient vision of the intersection of the three Americas: Latin (South) America, the Caribbean, and North America. The book has two main parts: First, are the lectures, which all relate to the themes of black cultural contributions throughout the Americas, minority representation and marginalization in democratic contexts, the ethics of racial representation, the notion of cultural transformation and transparency, and the ethical issues involved in cross-cultural exchanges. The second portion of the book is a critical interpretive essay that elucidates the Inter-American philosophical significance of the lectures and their relevance to current philosophical discussions.

Jacoby Adeshei Carter is Associate Professor of Philosophy at City University of New York, John Jay College, USA. His research interests include Africana philosophy, social and political philosophy, and philosophy of race and pragmatism, especially the philosophy of Alain Locke. He is Director of the Alain Leroy Locke Society and  Co-editor of the African American Philosophy and the African Diaspora series published by Palgrave Macmillan.

“This book will be an important contribution to scholarship and courses that address American philosophy, African-American studies, cultural studies, Inter-American philosophy, and Locke studies.  This series of lectures brings together many aspects of Locke’s earlier writings.  This book will provide an important framework for exploring those earlier essays as well as standing on it’s own as an important contribution to cultural studies, theories of democracy, and American philosophy.  Carter’s commentary provides important and insightful analysis that will help readers enter into Locke’s thinking and will help bring Locke’s thought to bear on important issues contemporary democracies face—increasing recognition of cultural pluralism while confronting the legacy of imperialism, slavery, and racial prejudice.  Human pluralism and interdependence are as important today for true democracy as they were when Locke first delivered these lectures.  Democracy constantly demands more of people and Locke’s analysis demonstrates the importance of this for individuals, nations, and the international community.  I am excited about the possibility of using this book in courses on Locke, on American philosophy, on social and political philosophy, and on race and cultural studies.” (Erin McKenna, University of Oregon, Eugene)

“Finally, Alain Locke’s Haiti lectures of 1943 are accessible to the Anglophone world. In these lectures, Locke extends beyond Harlem and the U.S. to discuss the cultural contributions, particularities, and common denominators of Afrodescendant peoples in North and Latin America (including the West Indies). Jacoby Adeshei Carter’s incisive introductory essay masterfully situates Locke as a transnational thinker, a critical pragmatist with nuanced and tenable conceptions of culture, race, imperialism, and democracy. This critical edition is an invaluable resource for anyone interested in the philosophy of race, Africana philosophy, Inter-American philosophy, cultural pluralism, or pragmatism.” (Lee A. McBride III, The College of Wooster)