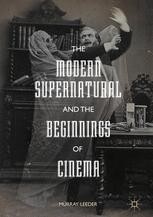 The Modern Supernatural and the Beginnings of Cinema

This study sees the nineteenth century supernatural as a significant context for cinema’s first years. The book takes up the familiar notion of cinema as a “ghostly,” “spectral” or “haunted” medium and asks what made such association possible. Examining the history of the projected image and supernatural displays, psychical research and telepathy, spirit photography and X-rays, the skeletons of the danse macabre and the ghostly spaces of the mind, it uncovers many lost and fascinating connections. The Modern Supernatural and the Beginnings of Cinema locates film’s spectral affinities within a history stretching back to the beginning of screen practice and forward to the digital era. In addition to examining the use of supernatural themes by pioneering filmmakers like Georges Méliès and George Albert Smith, it also engages with the representations of cinema’s ghostly past in Guy Maddin’s recent online project Seances (2016). It is ideal for those interested in the history of cinema, the study of the supernatural and the pre-history of the horror film.

Murray Leeder teaches Film Studies at the University of Calgary, Canada, and holds a PhD from Carleton University. He is the author of  Horror Film: A Critical Introduction (forthcoming) and Halloween (2014) and editor of Cinematic Ghosts: Haunting and Spectrality from Silent Cinema to the Digital Era (2015).

“The Modern Supernatural and the Beginnings of Cinema is a cornucopia of ideas, arguments and images both scrupulously well researched and highly readable. This original exploration of film history makes for one of the most pleasurable books I’ve read in 2017.” (Alan Price, The Magonia Blog, pelicanist.blogspot.de, April 05, 2019)

“Leeder skillfully unpacks the cultural currents that bound cinema’s early development to late-Victorian interest in paranormal phenomena. In rich and revelatory detail, he uncovers cinema’s hidden origins as a technology that spurred the imaginations of a motley crew of avant-gardists, would-be spiritualists, and charlatans who bespeak cinema’s ambivalent entry into the modern era.” (Rob King, Columbia University, USA. Author of The Fun Factory, 2008)

“A timely, original and above all captivating contribution to the field of early cinema studies, as well as to the thinking of the supernatural and, more specifically, spectrality. The ‘haunted screen’ is resoundingly and engagingly historicized, making readers realize that seemingly illuminating metaphors may actually serve to obscure and misdirect.”(Esther Peeren, University of Amsterdam, UK. Author of The Spectral Metaphor, 2014)

“Following the ‘spectral turn’ in recent scholarship, Leeder provocatively re-reads early film history and theory in relation to the historical occult. His engaging new book demonstrates just how much the emerging culture of cinema was haunted by ostensibly mystical concepts and ghostlike apparitions.” (Matthew Solomon, University of Michigan, USA. Author of Disappearing Tricks, 2010)