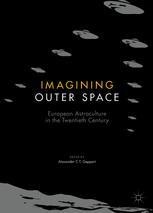 European Astroculture in the Twentieth Century

Imagining Outer Space makes a captivating advance into the cultural history of outer space and extraterrestrial life in the European imagination. How was outer space conceived and communicated? What promises of interplanetary expansion and cosmic colonization propelled the project of human spaceflight to the forefront of twentieth-century modernity? In what way has West-European astroculture been affected by the continuous exploration of outer space? Tracing the thriving interest in spatiality to early attempts at exploring imaginary worlds beyond our own, the book analyzes contact points between science and fiction from a transdisciplinary perspective and examines sites and situations where utopian images and futuristic technologies contributed to the omnipresence of fantasmatic thought. Bringing together state-of-the-art work in this emerging field of historical research, the volume breaks new ground in the historicization of the Space Age.

Alexander C.T. Geppert is Associate Professor of History and European Studies and Global Network Associate Professor at New York University Shanghai as well as NYU’s Center for European and Mediterranean Studies in New York City. From 2010 to 2016 he directed the Emmy Noether research group ‘The Future in the Stars: European Astroculture and Extraterrestrial Life in the Twentieth Century’ at Freie Universität Berlin.

Reviews for the first edition:
“The volume succeeds in demonstrating the relevance and importance of these three threads and arguments. Each from a different author, each of whom stems from a different disciplinary background, the 15 chapters that follow the introduction emphasise and reflect each of the threads to different degrees. ... Together, the chapters survey an excellent variety of topics that fall under the astroculture umbrella ... . Imagining Outer Space: European Astroculture in the Twentieth Century is a giant leap in that direction.” (Jason Beery, European Review of History - Revue européenne d'histoire, Vol. 21 (6), April, 2014)

“Imagining Outer Space is a brilliantly organized compendium of current scholarship at the intersection between space history and the popular cultures of science/fiction. It also sheds new light on the often underplayed European contributions to imagining outer space as a richly inhabited human realm. It successfully establishes ‘astroculture’ as an energetic and growing area of scholarly production and debate.” (De Witt Douglas Kilgore, Science Fiction Studies, Vol. 41, 2014)


“Imagining Outer Space offers rich potential in explaining the infatuation of spaceflight by Europeans of many different nationalities and cultures. It may well jump-start a new approach to the history of spaceflight, something beyond the well-worn space-policy and geopolitical studies that are so much a part of the field. Without question, astrocultural investigation is one of the more interesting and original efforts to restructure spaceflight history in the early twenty-first century.” (Roger D. Launius, Technology and Culture, Vol. 54, July, 2013)

“This is an eclectic, detailed ... and occasionally revelatory set of essays that delve into how (mostly Western) Europeans portrayed outer space, spaceflight and space exploration. It certainly fills a gap.” (Jon Agar, The British Journal for the History of Science, Vol. 46 (2), June, 2013)

"This volume's fifteen diverse essays, substantive introduction, and valuable epilogue all examine various aspects of 'astroculture' by considering and configuring the cultural and social significance of the Space Age both to and within the Atomic Age. … The diverse voices and visions … provide ample opportunities for interested readers to change-out comfortable disciplinary lenses and linguistic and conceptual toolboxes for unfamiliar optics and methodological approaches to outer space and space exploration that must surely transcend transnational and transdisciplinary boundaries. … Fascinating." (Pamela Gossin, Isis, Vol. 104 (3), 2013)

“‘Imagining Outer Space’ offers an interdisciplinary and transnational approach to the cultural and social history of the space age in Europe. While it offers fascinating insights into the European context, it is its redrawing of the disciplinary boundaries of space history that should be most applauded. ... the volume is to be highly recommended not only to readers interested in the history of outer space and the space age.” (Anke Ortlepp, H-Soz-Kult, August, 2012)

“Imagining Outer Space, though, takes a step in the right direction by defining the concept of astroculture and offering some interesting examples of relevant research.” (Jeff Foust, The Space Review, thespacereview.com, April, 2012)

“With its emphasis on multidisciplinarity, and its wide variety of contributions, topics, and themes, Imagining Outer Space demonstrates the rich potential that astrocultural studies holds for the field of the history of spaceflight, while at the same time, it truly contains something for everyone.” (Janet Vertesi, Quest, Vol.19 (4), 2012)


“All three volumes are highly recommended to those interested in how space exploration has affected culture and vice versa. I expect astroculture to grow in importance, both as a cultural phenomenon and as an area of study.” (Steven J. Dick, Former NASA Chief Historian and Library of Congress Baruch S. Blumberg Chair)

“This wonderful multinational and multidisciplinary collection is greater than the sum of its fascinating parts. Crystalline aliens, a mysterious Siberian explosion, silicon-based life forms, Tintin, Thunderbirds, Star Trek and Raëlians are just some of the many things which are examined in a brilliantly eclectic series of essays.” (David Edgerton, Imperial College London, UK)

“With generous references to the scholarship and original sources, as well as its own intelligent and well-integrated contributions, this book establishes a comprehensive new field of research 'astroculture.” (Michael G. Smith, Purdue University, USA)

“Imagining Outer Space is a brilliantly organized compendium of current scholarship at the intersection between space history and the popular cultures of science/fiction. It also sheds new light on the often underplayed European contributions to imagining outer space as a richly inhabited human realm. It successfully establishes 'astroculture' as an energetic and growing area of scholarly production and debate.” (De Witt Douglas Kilgore, Indiana University, USA)