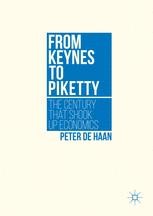 From Keynes to Piketty

The Century that Shook Up Economics

From Keynes to Piketty provides the reader with an accessible and entertaining insight into the development of economic thought over the past century. Starting with John Maynard Keynes's bestseller, The Economic Consequences of Peace (1919), and ending with Thomas Piketty's blockbuster, Capital in the Twenty First Century (2014), the author explains which dramatic political and economic events changed the way economists interpreted these events, and how they revolutionized the economic science.
The book contains biographies of Keynes, Schumpeter, Galbraith, Hayek, Friedman, Hirschman, North, and Piketty, alongside others, and highlights their extraordinary lives and works, anecdotes about them, and their often sharp differences of opinion. Extensive summaries of their main works provide the interested scholar and student with an accurate presentation of their contents. A must-read for all those who wonder what happened to economics during the past century, and why.

Peter de Haan is an independent consultant based at The Hague. A macroeconomist and a development economics specialist, de Haan has gained wide experience in development cooperation in Africa, Asia, and Latin America, and specialises in economic history and economic development.

De Haan co-formulated OECD/DAC’s Guiding Principles for Civil Service Reform. He was also responsible for the formulation of and assistance to development programs in the realm of public finance, budget support, civil service reform, decentralisation, anti-corruption, and human rights. He now guest lectures at the Institute of Social Studies (ISS) and Institute Clingendael on development and institutional issues; at the Canadian International Development Agency’s Headquarters about institutional sector analyses; and, at the Bolivian Academy of Economic Sciences on the institutional dimension of economic growth and the evolution of economic development theories.

De Haan is a visiting researcher at the Center for Global Development in Washington DC, and a member of the Royal Netherlands Economic Association and the Bolivian Academy of Economic Science.

“Why do economists offer such diverging analyses of problems? Why do they have such different opinions? Peter de Haan’s fascinating account of diversity in economic thinking will be of great help to the reader in search of explanations for the turbulent political and economic developments of the past century.” (Arie Kuyvenhoven, Professor Emeritus of Development Economics, Wageningen University and Research Centre, The Netherlands)

“The book offers a fine addition to the history of economic thought literature. It is pleasant reading for a wide audience and will help students conjure up a vision of the last one hundred years of economic thought. There is nothing tendentious or one-sided about the arguments of the author. He states his case fairly, lucidly, and persuasively in a well-written narrative of the main texts, and explains how ideas and events combined to produce them.” (Auke R. Leen, Assistant Professor of Economics, Leiden University, The Netherlands)

“From Keynes to Piketty is elegantly simple, orderly and clearly written. The book is a delight to read, and a powerful light in the understanding of the economic history of the last century. It is a book I would highly recommend to all adults craving to understand our complicated times – it brings economics to sense. Economists will remember this book many decades into the future and I hope that Peter de Haan will be remembered fondly for having written it!” (Ronald MacLean-Abaroa, Former Mayor of La Paz, Bolivia, and guest lecturer at John F. Kennedy School of Government, Harvard University, USA)

“Peter de Haan’s book is brilliantly narrated and provides a strong grasp of each one of the most important economists and their theories over the past century.” (Eduardo Rodríguez Veltzé, Former President of Bolivia, The Hague, The Netherlands)