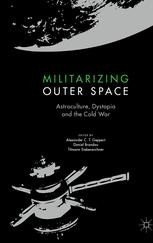 Astroculture, Dystopia and the Cold War

Militarizing Outer Space explores the dystopian and destructive dimensions of the Space Age and challenges conventional narratives of a bipolar Cold War rivalry. Concentrating on weapons, warfare and vio​lence, this provocative volume examines real and imagined endeavors of arming the skies and conquering the heavens. The third and final volume in the groundbreaking ​European Astroculture trilogy, ​Militarizing Outer Space zooms in on the interplay between security, technopolitics and knowledge from the 1920s through the 1980s. Often hailed as the site of heavenly utopias and otherworldly salvation, outer space transformed from a promised sanctuary to a present threat, where the battles of the future were to be waged. Astroculture proved instrumental in fathoming forms and functions of warfare’s futures past, both on earth and in space. The allure of dominating outer space, the book shows, was neither limited to the early twenty-first century nor to current American space force rhetorics.

Alexander C. T. Geppert is Associate Professor of History and European Studies at New York University, USA. He holds a joint appointment at NYU Shanghai and the Center for European and Mediterranean Studies in New York City.

“All three volumes are highly recommended to those interested in how space exploration has affected culture and vice versa. I expect astroculture to grow in importance, both as a cultural phenomenon and as an area of study.” (Steven J. Dick, Former NASA Chief Historian and Library of Congress Baruch S. Blumberg Chair)

“This lavishly illustrated volume makes a major contribution to our understanding of the Space Age. It expands historiography beyond the superpowers and radically reconceptualizes outer space. Militarizing Outer Space obliges us to think of ‘outer space’ as a zone beyond the confines of the earth, produced by cultural, political and technological interventions that embed it in earthly projects and respond to a multitude of hopes and anxieties. Space is not a remote, inaccessible realm, but a nearby ‘non-space’ that can be populated by technological infrastructures advocated by the military and appropriated by the market, colonized by earthlings fleeing Armageddon or the disasters of climate change, and filled with utopian aspirations or dystopian fears, but always appropriated by multiple stakeholders who imagine new worlds and ways of being in response to critical contingencies in everyday life. Readers will discover new and unexpected features of their life worlds presented in outstanding essays framed by a superb introduction and conclusion.” (John Krige, Georgia Institute of Technology, USA)

“In this very fine last part of a trilogy that meritoriously orbits around the concept of ‘astroculture’, one is reminded of the centrality of military technologies to modernization. The fourteen fascinating chapters offer a rich and welcome contribution to the history of outer space and globality. Popular imaginaries are tied to promises of supremacy, while the fuzzy boundaries between civilian and military use are interrogated. In a global age we would be wise to re-visit these manifold projections and dreams of space technology and its cultural repercussions, as they have much to teach us about the present. A very important book.” (Nina Wormbs, KTH Royal Institute of Technology, Sweden)

“Militarizing Outer Space is a compellingly original collection of essays that breaks out of the conventional mold of interpreting space races and arms races narrowly as products of the Cold War. Long before we could reach it, humans imagined space as a realm of war populated with laser-wielding heroes, orbital fortresses and extraterrestrials ripe for conquest. From the moral thought of C. S. Lewis to Ronald Reagan’s Strategic Defense Initiative, the authors offer a deeply researched analysis of the connections between security, fantasy and technopolitics. Although no war has ever occurred outside the earth’s atmosphere, this volume convincingly shows how military anxieties more than a desire to reach the stars drove the development of spaceflight. For anyone interested in the rise of militant astroculture and actual warfare, Militarizing Outer Space is a must-read.” (Joe Maiolo, King’s College London, Great Britain)