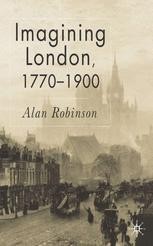 Combining a unique overview of metropolitan visual culture with detailed textual analysis, this interdisciplinary study explores the relationship between the two cities which Londoners inhabited: the physical spaces of the metropolis, whose socially stratified and gendered topography was shaped by consumer culture and unregulated capitalism; and an imaginary 'London', an 'Unreal City' which reflected and influenced their understanding of, and actions in, the 'real' environment.

'Alan Robinson's Imagining London 1770-1900, offers the reader a striking image of London's myriad representations of itself, to itself, across the long nineteenth century. Developing around the interrelated concerns of economics and gender, this stimulating, often provocative historically and culturally embedded volume grounds convincingly the structural conditions of London's identity in its material nature, through its literary texts, its architecture, topography, and the material and economic practices by which the city develops as a modern megalopolis. From William Blake to Henry James, from Millenarian revolt and dissent to order, propriety, and attempted control and surveillance, Robinson's often provocative engagement with the ways in which 'imaginary London', its verbal and visual images, are mediated by the experience of that city on the part of its inhabitants, its observers, its flâneurs. Imagining London is a tour de force of close reading and politicized urban historiography in which all scholars of London, whether or not they agree with Robinson's approach, will find much to ponder, to rethink, and to reopen to careful consideration.' - Julian Wolfreys, Professor, Department of English, University of Florida

'This is an excellent book and each chapter is a valuable contribution to the scholarly debate over the representation of London in late Georgian and nineteenth-century London, and indispensable to any scholar working on London in this period.' - Lawrence Phillips, Literary London Journal

'Robinson is an acute guide, drawing together threads of contemporary social comment, political intrigue and architectural development to create a convincing account of the ways in which contemporary tensions are simultaneously addressed and elided in literary and artistic works.' - Times Literary Supplement