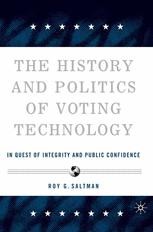 The History and Politics of Voting Technology

In Quest of Integrity and Public Confidence

Saltman traces the evolution of voting technology in the USA, from voice to digital, highlighting how the antiquated systems in use today are a legacy of the industrial revolution of the Nineteenth-century and the early computer revolution of the 1950s and analyses the current day situation.

ROY G. SALTMAN is an independent consultant in election policy and technology. He has previously worked at the National Institute of Standards and Technology, USA.

"For a quarter century Roy Saltman has been the world's most knowledgeable expert about modern voting machines, warts and all. In The History and Politics of Voting Technology, Saltman shares this knowledge with us and demonstrates that the history of voting technology is more than it seems. Bound up in the story of voting machines are stories as old as America itself, including our endless fascination with technology as a panacea and our conflicting (and ultimately irreconcilable) visions about how to protect and extend democracy in America. This is a must-read for those interested in the politics of election reform and in how technology and politics intersect in the United States."

"Saltman's detailed description of the history of voting technology helps readers to understand why the election disaster of Florida, 2000 occurred. Saltman reveals how the federal and state government's lack of concern about the development or consequences of voting technology, despite the central importance of elections to a democratic system, contributed to erosion of public confidence in the integrity of elections. This work is a major contribution to current and future debates about how to improve the American electoral system."

"In the wake of the 2000 presidential election, when many of us began to wonder what could be done to fix obviously inferior voting technologies, we looked to Roy Saltman's early and seminal research to provide foundation and insight into our efforts. Now, in this new research, Saltman gives us a broad sweeping historical perspective on the past, present and future of voting technologies for American voters. This is going to be an important reference for all interested in improving voting technologies." - R. Michael Alvarez, Professor of Political Science at Caltech, Caltech/MIT Voting Technology Project"The History and Politics of Voting Technology is admirable . . . It exemplifies an evenhanded and research-driven approach that is far too rare in contemporary debates over election reform. All of us who care about election administration still have a lot to learn from Roy Saltman." - Election Law Journal"The History and Politics of Voting Technology contains a wealth of information about voting technology and how it has evolved." - Alexander Keyssar, Harvard University

"...the clear-eyed and workmanlike approach of The History and Politics of Voting Technology is admirable. The book is filled with facts that are vital to understanding how the problems with the United States' election system developed and what ought to be done about them. More importantly, it exemplifies an evenhanded and research-driven approach that is far too rare in contemporary debates over election reform. All of us who care about election administration still have a lot to learn from Roy Saltman." - Election Law Journal