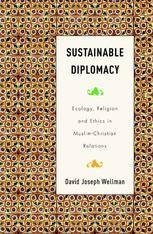 Drawing on a variety of disciplines, Sustainable Diplomacy is a highly constructive work. Set in the context of modern Moroccan-Spanish relations, this text is a direct critique of realism as it is practiced in modern diplomacy. Proposing a new eco-centric approach to relations between nation-states and bioregions, Wellman presents the case for Ecological Realism, an undergirding philosophy for conducting a diplomacy which values the role of popular religions, ecological histories, and the consumption and waste patterns of national populations. Sustainable Diplomacy is thus a means of building relations not only between elites but also between people on the ground, as they together face the real possibility of global ecological destruction.

"David Wellman's book, Sustainable Diplomacy is a bold attempt to address the necessity of tackling the unknown and taking a critical look at the present structures of state relations that are based solely on power. Wellman's book successfully explores the shortcomings of rigid views and proposes itineraries of understanding and change that may more accurately reflect the need we have for new sensitivities. His proposal is an intelligent attempt to be responsible in a world of differences where old cleavages too often justify mistrust and violence. I am convinced that Wellman's contribution will open a new inter-disciplinary field of study that will look at long-term reorientation of collective understanding. Wellman's effort proposes a way to make people-to-people conversations systematic, real and fruitful, enabling them to transcend the rigidity of the state system."

"Strong works in Christian Ethics and international affairs have been conspicuous by their absence in recent decades. Not only is Wellman's a sophisticated presentation in its own right, it establishes 21st century terms for such work: both interfaith and ecological sensibilities

and perspectives now belong to political realism itself."

"Sustainable Diplomacy raises a challenge to both Muslim and Christian theologians, ethicists and diplomats. As the ecological destructiveness of our cultures increasingly limits our possibilities for happiness, this study asks how our religious visions of "the good life" act as resources for political reconciliation and for mutual survival. The permeable boundary between Morocco and Spain acts as a site and a metaphor for the relationship between Christianity and Islam, between Europe and the developing world, between wealth and poverty, between the familiar and the stranger."

"This is a visionary work, applying perspectives that have been generated on rather abstract

qllevels of ecological philosophy, religion, and social theory, and showing how those perspectives can actually aid concrete human relationships. I am not aware of anything remotely like this book.