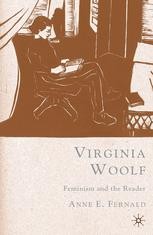 Feminism and the Reader

This study argues that Virginia Woolf taught herself to be a feminist artist and public intellectual through her revisionary reading. Fernald gives a clear view of Woolf's tremendous body of knowledge and her contrast references to past literary periods

'Reading against the grain, as she argues Woolf herself did, Fernald brilliantly illustrates the centrality of Woolf's passionately ironic dialogues with Sappho, Hakluyt, Addison, and Byron to her legacy as feminist artist and theorist. By asking questions others haven't thought to ask, by finding parallels that both surprise and illuminate, Fernald, like Woolf, revises literary history, substantially enriching our understanding of the writer and her world.' - Brenda R. Silver, Dartmouth College

'Fernald's elegant and smart book is wide ranging, taking up Woolf's autobiographical writings as well many of her major novels and essays. Fernald also brings a solid grounding in the history of English literature to her study of Woolf, which allows her to highlight Woolf's constant connection and response to her forbearers.I don't know of another book that offers precisely this strong combination.The Woolf who emerges is learned and engaged, almost scholarly in her attention to literary history, but lively and profound in her revision of the past." - Jessica Berman, The University of Maryland

'Anne Fernald's four case studies illuminate Virginia Woolf as an adventurous and independent reader, channeling and replenishing her creative wellsprings at the fountains of ancient Greece, the Elizabethan voyages, the English eighteenth century, and Lord Byron. A delightful portrait of the artist reading and a welcome contribution to Woolf's literary biography.' - Christine Froula, Northwestern University

'At last, Virginia Woolf, the passionate reader, and Virginia Woolf, the dedicated feminist, need no longer be separated from each other. Thanks to Anne Fernald's own gifts as a reader of literary and social texts, we can now appreciate, as never before, how Woolf's reading and her feminism complement and reinforce each other. Fernald's method is as striking as her argument: she traces the fine lines as well as bolder contours of Woolf's writings through her lifelong engagement with four figures - Sappho, Hakylut, Addison and Byron who inspired her art and helped shape her politics. The result is a commanding portrait of Woolf as an exemplary reader for her time and ours.' - Maria DiBattista, Princeton University